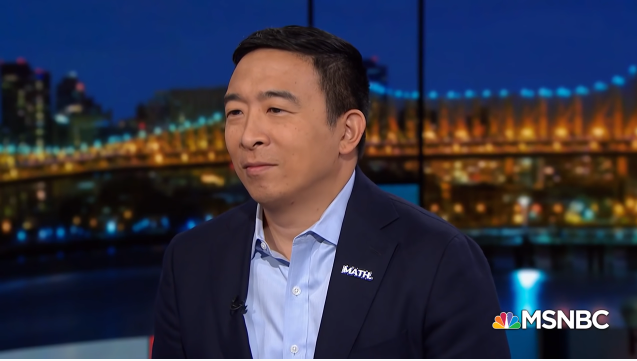 MSNBC apologized on Sunday after it once again left the name of 2020 Democratic presidential candidate Andrew Yang off a graphic. This time, it happened during yesterday’s edition of Up with David Gura.

Earlier on UP, we aired a poll graphic that inadvertently left off @AndrewYang. This was a mistake that we’ve since corrected on air. We apologize to Mr. Yang. Here’s the correct graphic: pic.twitter.com/SDoqsxdiiD

Here’s the original on-air graphic, which leaves Yang and his 3% off the graphic.

Why does @MSNBC keep leaving out @AndrewYang on their graphics (actually at 3% here)?

This has happened on a number of occasions, I haven’t seen with any other candidate. It’s not just a slip up. Unacceptable. pic.twitter.com/2vJrYx5DKQ

As mentioned above, this would seem like an innocent oversight except for the fact that it’s not the first name Yang’s name has been left off an MSNBC Democratic presidential candidate graphic. This one was for fundraising:

Pretty sure we should be on this graphic. @msnbc pic.twitter.com/7kbj2TzuHW