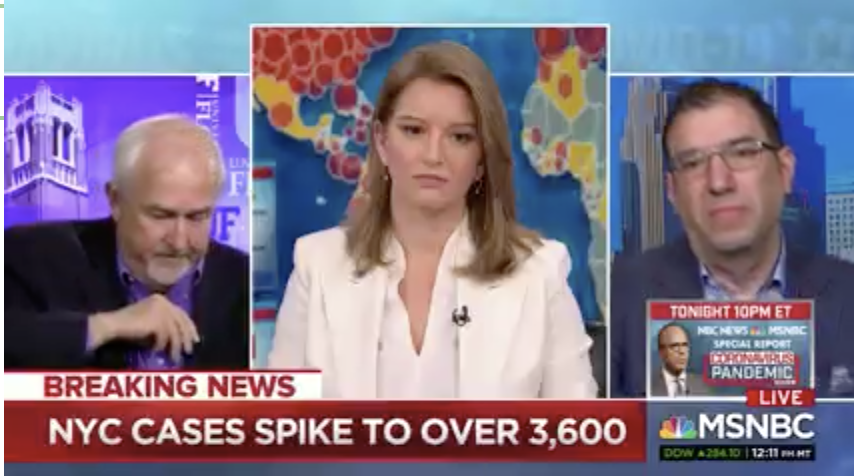 Craig Fugate, the former Director of FEMA under President Obama, was not happy with how his point of view was being characterized during an interview today with MSNBC’s Katy Tur. He got up and left the live interview in the middle of it.

The discussion was about federal vs. state government responsibility in response to coronavirus.

“Governors need to be in power to take dramatic action, protect lives, maximize their resources, start up production. If we wait for the federal government, it’s too late,” Fugate argued, adding, “The idea of a single person in charge taking control and running this is a myth. This is going to be dealt with on the front lines and local and state levels, and each state is going to be addressing this unique to their systems.”

“With all due respect to your other guest, there’s not a governor in the country that’s waiting for the federal government right now. They are all acting. What they need is coordination. And what your other guest is suggesting here is not helpful,” said Slavitt. “We need a great partnership between the federal and state government.”

“I don’t need to listen to these bullshit people,” Fugate said under his breath, as he took out his earpiece and took off his mic.

“Craig, you want to sit down and respond to this? I guess Craig has left. Andy, he doesn’t agree with you at all,” said Tur.

“I guess not. Look, these are trying times,” said Slavitt. “And everyone is trying their best, and I know Craig is — I don’t know Craig personally, but I’m sure he’s working as hard and trying his best. Everybody is. These are unprecedented times. So it’s understandable that he’s frustrated.”

Tur then ended the segment.

It’s not clear if the booking was meant to create some cable news heat, or if that just naturally happened. Either way, this is not the time for cable news segments to turn into sparring matches. During the coronavirus crisis, cable news is best when it’s used to provide light, not heat.