ABC’s Good Morning America remained No. 1 in total viewers this past week, while NBC’s Today finished No. 1 in the news demo. The programs, once again, posted audience declines from the comparable week in 2016 (week of April 4).

Today posted a -12 percent decline in total viewers and a -16 percent decline in the news demo relative to last year. Despite the year-over-year drop, Today has now won 67 straight weeks in the key demo (83 of 84 weeks), its best streak in more than four years.

CBS This Morning managed to hold steady in total viewers and grow +1 percent in the news demo relative to the same week last year. CTM saw a ratings boost at the start of the week, likely thanks to the NCAA Championship game that aired Monday night on the Eye.

Nevertheless, just 354,000 viewers separated CBS from NBC this past week, a figure which represents the network’s best competitive position compared to NBC in the mornings in at least 29 years. 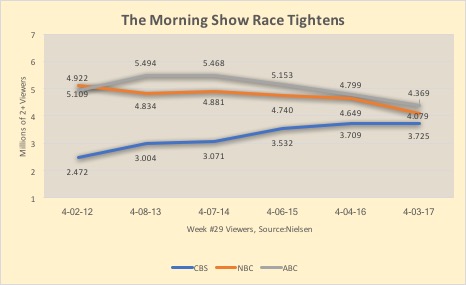