NEXT:CNN Business Launches Today With a New San Francisco Bureau
PREVIOUS:Jeff Glor: 'We Want to Show Our Audience What’s Happening in Places Like Dallas and St. Louis and Phoenix, and Why it Matters to Them' 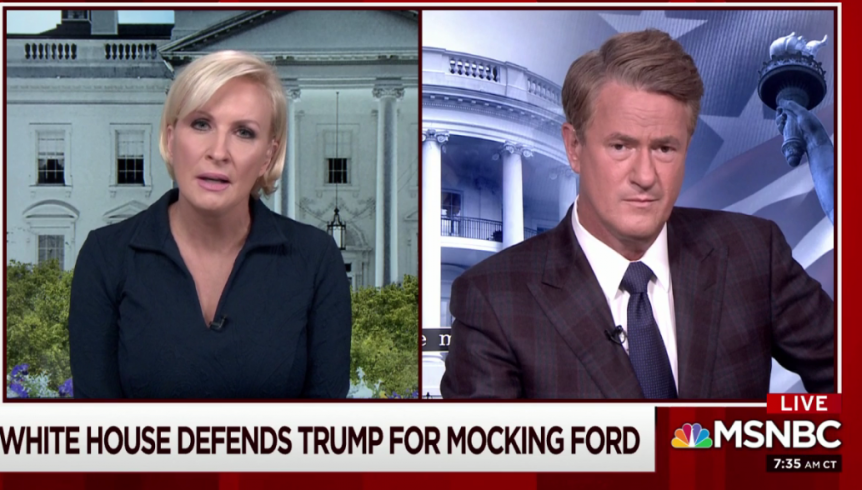 There appeared to be some conflict for a couple hours this morning between two high profile cable news personalities.

It stemmed back to a story from the site Mediaite, which had the headline: “Mika Brzezinski Challenges Kellyanne Conway to Reveal Details of ‘Very Convenient’ Sexual Assault Story.” (The headline was later changed).

The story published a little after 8 a.m. ET, with a number of notable personalities tweeting their initial thoughts about the story not long after.

More TV newsers tweeted their thoughts about the story after the broadcast was over, and Brzezinski felt the need to defend herself against them.

She did not hold back, with especially pointed responses to a retweet from Chris Cuomo‘s account (see below).

Both Cuomo and Brzezinski later took down their tweets, and explained their thinking not long after we reached out to their respective representatives.

deleting this. I am all about engagement and disagreement – but I am not about adding to ha politics and using victims as fodder. Ford was victimized again – by politics. I won’t add to that. I have no fight with Mika or anyone. We must be united on respecting victims https://t.co/1KFwLZkQUw

Thank you @ChrisCuomo .. this is the best point made today. Let’s leave it there. I took my tweets down too. https://t.co/cNaAHLV0ol

We are good. And glad we spoke. If I had known how this really important subject had been weaponized for political effect this morning, I would not have given it fuel – and would have condemned the contrivance. This matters too much to be a football https://t.co/DXNoQJWWck

Below are Brzezinski’s original tweets, starting with the most recent (before she and Cuomo got back on good terms) and moving back in time to her original response to Greta Van Susteren‘s tweet, which went out in between the time of story publication and Morning’s Joe’s on-air response.

.@ChrisCuomo And Chris, instead Playing for the next interview on Twitter… Why don’t you apologize because you were way off, Wrong flat out… And misleading. Your job is to get the facts right and you were wrong and you should apologize

.@ChrisCuomo You have offended me as a competitor and a woman And as a victim of a violent sexual assault. I demand an apology. This is below us. Or at least I thought it was. You should apologize

.@ChrisCuomo As a victim of a violent sexual assault myself, I would never force anyone to come forward… You need to actually read and listen to what I said… Might be hard when you’re so quick to tweet https://t.co/djmlhs7JmG

.@ChrisCuomo The headline was changed because they got it wrong
And you got it wrong as well.. Why don’t you get the facts first. https://t.co/djmlhs7JmG

Brzezinski did give kudos to a different outlet for their headline.

And while I’m at it, yes I did say this. This headline happens to be accurate. Any questions? https://t.co/ds39gFTgu7

Before that, she responded strongly to CNN host S.E. Cupp:

S.E. You know better than this.
That you would defend Kellyanne Conway defending the president for attacking Ford and then you’re going to say that when I call out hypocrisy… That’s why victims don’t want to come out? Shame on you.. https://t.co/EWt78B8Erz

And as mentioned, here’s the back and forth between Brzezinski and Van Susteren:

And Greta, try to up the level on what you read. This web site consistently manipulates the truth to make headlines that are incorrect. You should know better. I’m disappointed – I really respect you. Surprised https://t.co/IMvVFA48Ai

Greta .. I respect you so I will go further.. I made my point UNDERSTANDING..that it is SO hard .. how dare KC Say Ford was being treated by a faberge egg.. I said “try being the egg.” As SHE knows it’s not easy. Hypocrisy. https://t.co/IMvVFA48Ai

I’d did not force. I said try being “the egg”.Watch the whole thing. I think it’s terrible to support the mocking of a victim — Greta! Cmon. Be honest https://t.co/IMvVFA48Ai