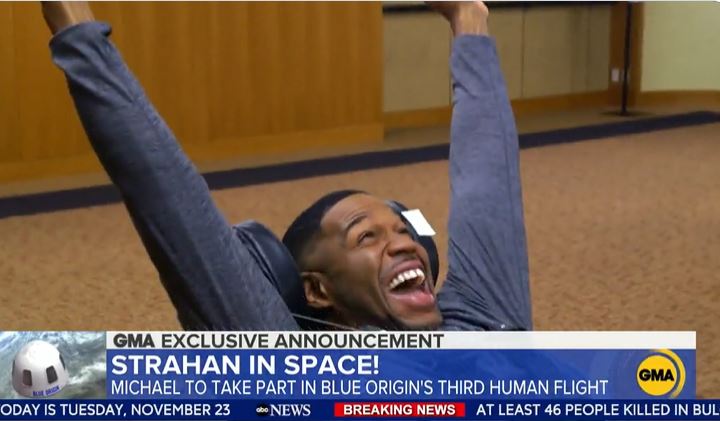 Good Morning America’s Michael Strahan announced on Tuesday’s broadcast that he will be participating in Blue Origin’s next human flight. Strahan will be traveling on the New Shepard rocket Thursday, Dec. 9, lifting off from his home state of Texas.

Just four months ago, he was reporting on Blue Origin’s first human launch. Now, he’s joining Blue Origin on its next mission.

“Blue Origin—they approached me and asked if I wanted to be a crew member, and without hesitation, I said, ‘yes,” said Strahan.

He added: “I believe that this is the way of being innovative, creative, pioneers in aviation, now space travel. And it’s going to take a while but I do believe that it will bring a lot of technological breakthroughs and also innovations to us here on Earth, and I just want to be a part of it.”

Strahan is one of six people in the capsule, one of whom is the daughter of Alan Shepard, the first American to ever fly to space.