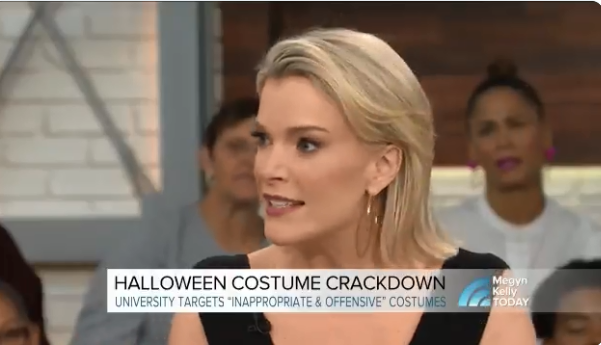 Update: NBC News’ Megyn Kelly shared a letter with colleagues not long ago:

One of the wonderful things about my job is that I get the chance to express and hear a lot of opinions. Today is one of those days where listening carefully to other points of view, including from friends and colleagues, is leading me to rethink my own views.

When we had the roundtable discussion earlier today about the controversy of making your face look like a different race as part of a Halloween costume, I suggested that this seemed okay if done as part of this holiday where people have the chance to make themselves look like others. The iconic Diana Ross came up as an example. To me, I thought, why would it be controversial for someone dressing up as Diana Ross to make herself look like this amazing woman as a way of honoring and respecting her?

I realize now that such behavior is indeed wrong, and I am sorry. The history of blackface in our culture is abhorrent; the wounds too deep.

I’ve never been a “pc” kind of person — but I understand that we do need to be more sensitive in this day and age. Particularly on race and ethnicity issues which, far from being healed, have been exacerbated in our politics over the past year. This is a time for more understanding, love, sensitivity and honor, and I want to be part of that. I look forward to continuing that discussion.

I’m honored to work with all of you every day.

Megyn Kelly is under fire for remarks she made on her 9 a.m. program today about race and the use of blackface.

The panel discussion had to do with colleges cracking down on students wearing “inappropriate” and “offensive” Halloween consumes, and Kelly seemed to not understand why wearing blackface on Halloween is considered to be offensive by most.

She suggested that some people who get in costume are simply trying to get into their Halloween character.

“But what is racist?,” Kelly asked her panel of Melissa Rivers and NBC Newsers Jacob Soboroff and Jenna Bush Hager. “Because you get in trouble if you’re a white person who puts on blackface on Halloween, or a black person who puts on white face for Halloween…Back when I was a kid that was OK, as long as you were dressing like a character,” she commented.

Kelly brought up Real Housewives personality Luann deLesseps as an example. She once generated debate by going as Diana Ross for Halloween. “There was a controversy on The Real Housewives of New York with Luann, as she dressed as Diana Ross and she made her skin look darker than it really is,” Kelly said. “People said that was racist! And I don’t know, like, I thought, like, ‘Who doesn’t love Diana Ross?’ She wants to look like Diana Ross for one day. I don’t know how that got racist on Halloween.”

The panelists started talking over one another a bit, with Rivers, Soboroff and Hager appearing to disagree with Kelly on this issue.

“I haven’t seen it. but it sounds racist to me,” remarked Soboroff. “Me too,” added Hager.

It’s worth noting that there was no African American at the table to weigh in on this issue.

Megyn Kelly wonders what the big deal is about blackface pic.twitter.com/07yvYDuAYe

This isn’t the first time Kelly has sparked controversy for her comments on race. The notorious “Santa is just white” remark from 2013 when she was still at Fox News immediately comes to mind.

I cannot believe the ignorance on this in 2018. You are on national television. You have a responsibility to educate yourself on social issues @megynkelly. This is so damaging. https://t.co/R7UJzkDDG9 https://t.co/7qFkqGHfGJ

I was born in the same decade as ⁦@megynkelly⁩ and do not recall blackface being acceptable anywhere, anytime. https://t.co/uN061Uo9cS

Ohhhhhhhhhhh!!!! So Halloween is like a “bye week’ for racism…. Like a one day Purge for blackface…..GOT IT! https://t.co/0ZPBGHJ6U0

Is she, @megynkelly really this ignorant to think Black Face is okay at anytime? Too much on too many different levels here to unpack. Black Face for Halloween or anyday, NO! https://t.co/4L3HM7y2Zz