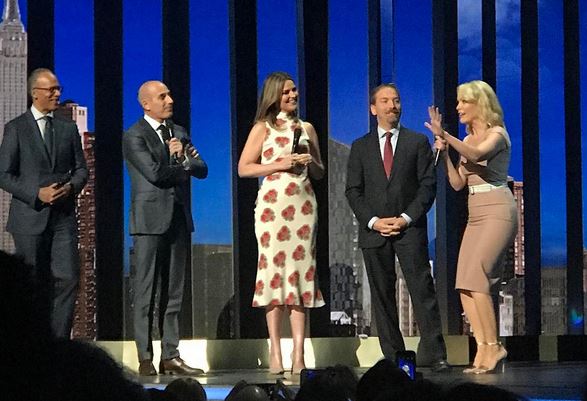 Holt’s Today show colleagues Matt Lauer and Savannah Guthrie and Meet the Press moderator Chuck Todd joined him on stage, followed by their newest colleague Megyn Kelly. “What a great time to be at NBC. I’m here! I’m psyched!” Kelly told the crowd at Radio City Music Hall, according to Adweek’s Jason Lynch who is covering the event.

“I feel so honored to be joining this historic, incredibly talented and winning team,” she said. “I’m thrilled now to be able to anchor the kinds of broadcasts that I’d always dreamed I’d be able to do, that I felt in my heart I was born to do.”

Kelly, who joined NBC News two weeks ago today, will make her prime time debut next month hosting a Sunday night newsmagazine and will take over the 9 a.m. hour of the Today show starting in the fall. Today’s presentation is meant to get advertisers excited about the new and returning shows from networks including NBC, USA, Bravo, CNBC, MSNBC, Syfy, Oxygen and more.

CNBC had a few minutes at the upfront as well with Jim Cramer and The Profit host Marcus Lemonis taking the stage.

This same week last year, Kelly appeared at the FOX upfront where she was promoting her one-time special Megyn Kelly Presents, which included her interview with GOP front-runner Donald Trump. Photo below: