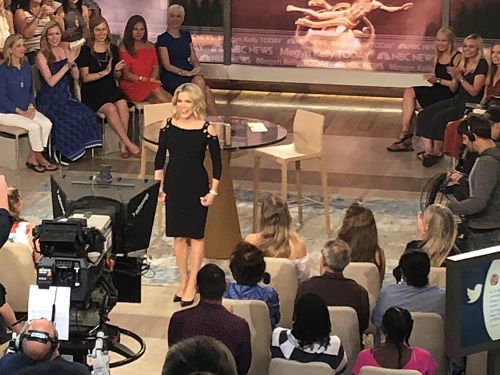 The studio audience for the July 25 edition of Megyn Kelly Today came from as far away as New Zealand and as close as New Jersey. They were African-American, Caucasian, Hispanic and predominately female (it is morning TV, after all).

As is the case with the flagship Today show, the A block for Kelly’s 9 a.m. hour is topical. Today Show co-anchor Savannah Guthrie was on the program today as part of the show’s recurring “Savannah Wednesdays” segment. The attorneys-turned-TV newsers gave their respective takes on Demi Lovato‘s overdose and compared awkward childhood photos.

Then came the guests, including the sister of the late-Natalie Wood, who stopped by to talk about a new 12-part podcast about Wood’s mysterious 1981 death, and former supermodels Elle MacPherson and Veronica Webb, who discussed their respective wellness brands.

Kelly is at ease in this format, both with her guests and after the show with her audience. At home, NBC viewers seem to be warming to the former Fox News anchor. According to Nielsen live-plus-same-day data, Megyn Kelly Today has posted 3 consecutive months of total viewer growth, from March through June. Last month, the program averaged 2.3 million total viewers, and posted +3 percent growth vs. May 2018. By comparison, the syndicated Kelly & Ryan, which airs opposite Megyn Kelly in many markets, averaged 2.71 million viewers last month.

Kelly spends about 30 minutes after each show taking questions from her audience. After today’s post-show Q&A, we stopped by Kelly’s dressing room for our own chat with one of TV’s highest-paid personalities (she reportedly makes $23 million annually). Her executive producer Jaclyn Levin was present as well.

TVNewser: We’re now 10 months into Megyn Kelly Today. What changes have been made to the program since last September, and what have you, in particular, pushed for?

Kelly: The first year of the show, you’re just getting your legs under you. You’re figuring out what works, what doesn’t work. We ticked off things that weren’t working for me, for us, and then you say, “Well, what do we want to replace that with?” You brainstorm and come up with something that feels authentic, and you try. That’s how you start to build your show. The whole thing has just been part of that process. We’ve been doing more panels at the top of the show, that’s one example; which we like, but it’s not the same people everyday. That’s been feeling good because it allows us to do just a little bit more conversation, as opposed to just interviewing. We can get to more topical things. The whole thing is evolutionary.

Speaking of the panels, you had a rather intense back-and-forth earlier this month with [NBC News correspondent] Stephanie Gosk about Sen. Elizabeth Warren. A little out of the ordinary for morning TV. Was that the lawyer in you? Can you explain that a little bit?

Not necessarily out of the ordinary. We’re on at 9, and in some markets The View is on at 10. They argue a lot. So you do see that challenging back-and-forth elsewhere. But I would say that on our show, it’s always respectful. It’s never nasty or low brow. I love the back and forths on our panels. I’m an Independent, but on certain issues I definitely am center-right. I like having those discussions. I think it’s good for the audience to see smart people who really like each other talk about controversial issues in a respectful manner. To me, as a viewer at home, I would watch that. I think it’s interesting. Even short of that, for me just as the host, I enjoy it. Part of this is: “What do I enjoy doing?” and “How do we make the show sing for me?”

Moving over to ratings, the program got off to a slow start, but is starting to pick up a bit. What are you doing well, and where do you want to improve?

Levin: I think we’re great storytellers, and I think the beauty of our show versus any other is that we’re able to do that. We allow our stories to breathe. We want people to understand that and give us time and come and test us; and see that they’re not going to get a 4-minute cookie. They’re going to come and hopefully learn something and walk away with something; a certain feeling. Like Megyn said, the panels have been great. An example is us being able to remain topical. I just hope we always keep evolving, and if we don’t, then you become complacent and dead in the water, and who wants that? I’m proud that we’re just taking chances. We’re doing really tough stories that did well for us and that retained our audience every single segment. So, we will keep experimenting and trying things that others may not be doing in morning TV. There shouldn’t be anything typical because then I think you’re dying.

So you’re really not taking ratings into account, it’s more about putting on a show that you feel solid about. Is that accurate to say?

Kelly: Yes, we’re hoping that’s a recipe for success. That if we keep doing a show that feels good to us, that we feel connects with the audience, then the numbers will do the right thing.

Levin: And it has to be organic to Megyn. For her to feel comfortable in a segment and be able to own it. I think we’re really aware of that, and we pay close attention to it. Megyn is involved in every decision on this show. She’s a true partner.

Kelly: And even the back half of the show when we launched was much more frivolous than it is now, and that’s by design. We got away from that intentionally because it did not feel right for me. I think the audience also felt that way from me. I think we’re getting to a place now where it feels authentic, and it feels good to me. Emotionally, it feels like it’s setting the right tone. Some days are more serious, some days are more completely uplifting, some days are funny. A lot of days are a mix of all those things. But you are definitely going to feel something when you watch this show, something other than anger. 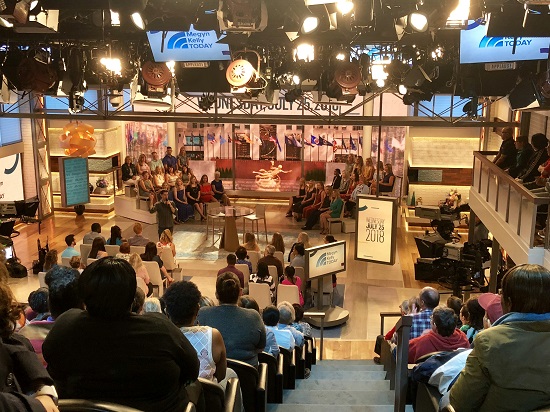