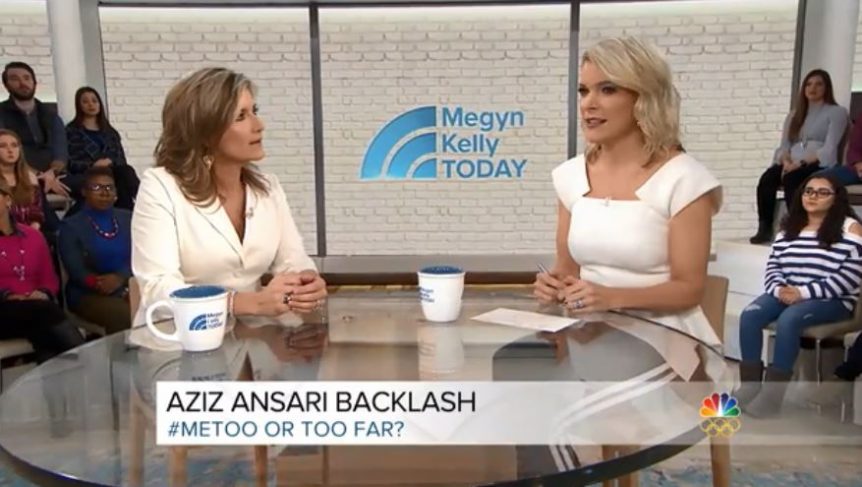 HLN anchor Ashleigh Banfield was back at her old stomping grounds at NBC this morning appearing on Megyn Kelly Today.

The two talked about Banfield’s coverage this week of the Babe.net story that has brought a new twist to the #metoo movement. Banfield took to task the writer and subject of the story which accused actor Aziz Ansari of sexual misconduct.

“There is 100 percent a conversation here, and there is a way to have the conversation,” Banfield said. “I think this was launched in a very sloppy and reckless way because what happened, if her words are true, did not amount to something that is actionable. Legally actionable. But what she did was the equivalent of a sentence for a man. So, that is where I took issue with publicizing this, the way she did.”

At the end of the conversation, Kelly told Banfield she’s one of the reasons Kelly is on TV today.

“I used to be an unhappy lawyer and I wanted to change my life and I didn’t know how to do it,” Kelly told Banfield, who was an anchor/reporter at MSNBC/News from 2000-2004.

“9/11 happened, I turned on the TV and you were the one I watched. You handled yourself with such dignity, such composure, not emotional but empathic to what was going on and I felt envy. Envy of you and the amazing job you were doing for America. It was a lightbulb moment for me, that I could be like that woman and I could be doing a service to the nation,” Kelly said.