NEXT:BBC Newser Henry Golding Is One of the Stars of Crazy Rich Asians
PREVIOUS:That Time Dateline's Dennis Murphy Met One of His Biggest Fans 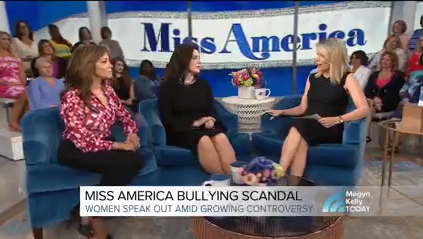 Yes, this includes Miss America chairwoman Gretchen Carlson, a former Fox News colleague of Kelly’s. The Carlson-Kelly Fox News connection was not brought up before the start of this particular interview (though the connection has been mentioned in previous interviews).

Anyways, here’s what Whitestone and Charles had to say to Kelly this morning:

“Yes, absolutely and the board. Goodbye.” 2 former Miss Americas about the organization’s leaders and the bullying scandal they’re facing. #MegynTODAY pic.twitter.com/exeJqepuHS

This morning’s 10-plus minute interview took place just days after Miss America 2018 Cara Mund made extraordinary allegations about the Miss America Organization and its leadership in a lengthy letter, published Friday on her Facebook page.

In her letter, Mund calls out Miss America CEO Regina Hopper and Miss America chairwoman Carlson for having “silenced me, reduced me, marginalized me, and essentially erased me in my role as Miss America in subtle and not-so-subtle ways on a daily basis.”

“The rhetoric about empowering women, and openness and transparency, is great; however, the reality is quite different,” Mund’s letter read (see below). “I am living that difference. I am not comfortable with any of us being controlled, manipulated, silenced, or bullied. At this point, my integrity—and saying and doing the right thing—means more to me than whatever punishment may await me.”

Please see my statement in full below pic.twitter.com/rvmee4es7g

Carlson also notes that outside organizations are pulling scholarships due to the explosive allegations Mund publicized in her letter.

A former Miss America herself (1989), Carlson has instituted a number of changes since being named chairwoman of the organization at the start of 2018. These include removing the swimsuit and evening gown portions of the event.

This is a problem for the organization for a variety of reasons, but the timing is especially rough because the 2019 Miss America Competition will broadcast live on Sept. 9 on ABC.

Carlson has been an outspoken force in the #MeToo movement since leaving Fox News more than 2 years ago. In addition to running the Miss America Organization, she was named one of Time’s 100 Most Influential People of 2017, and is also developing and hosting a slew of docu series for Lifetime.

Carlson filed the sexual harassment lawsuit against late Fox News chairman Roger Ailes in June 2016, a lawsuit that sent shock waves through the entertainment industry. Ailes resigned from Fox News just two weeks after the lawsuit was filed, and Carlson would earn a $20 million settlement and a public apology from 21CF in September 2016.

We’re all aware with Kelly’s history with the late-Fox News chairman as well. She once referred to him as “a dirty old man who wants to get in my pants,” and accused Ailes of harassment after Carlson filed her lawsuit and outside investigators began seriously looking into his behavior.