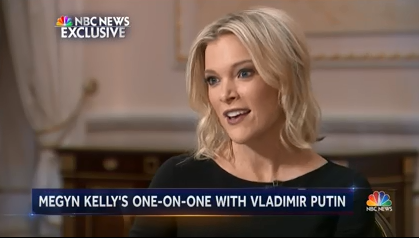 A bit of surprising news about the news was announced at the beginning of Thursday’s NBC Nightly News broadcast.

In the open, Lester Holt said that fellow NBC Newser Megyn Kelly is on assignment in Moscow, and that she sat down for an exclusive interview with Russian PM Vladimir Putin earlier.

Before introducing a 90-second excerpt from the sit-down, Holt first went to NBC News chief foreign correspondent Richard Engel, who gave a report from Russia, before teeing up Kelly’s interview, which comes as Putin made news once again today, warning the world that Russia has a new intercontinental ballistic missile so strong that it can evade any sort of detection and strike anywhere on the planet.

Here’s some of their conversation:

Kelly: Several analysts in the West have said, this is the declaration of a new Cold War. Are we in a new arms race right now?

Putin:  My point of view is the individuals who is said that a new Cold War has started are not really analysts. They do propaganda. If you were to speak about arms race, then an arms race began at exactly the time and moment when the U.S. opted out of the anti-ballistic missile treaty.

Kelly: Some analysts are suggesting you tested it and it’s failed and that’s why you only showed animations of it today and had not yet produced any actual videos.

Putin: Are you talking about ICBM’s?

Kelly: Yes, the one that you claim renders defense systems useless.

Putin: As a matter of fact, every single weapons system discussed today easily surpasses and avoids an anti-missile defense system.

Kelly: But you’ve tested it?

Putin: The test was excellent. some of them still have to be fine tuned and worked on. others are already available to the troops and already are battle ready.

Kelly: For the record right now, do you have a workable ICBM that’s powered by nukes that you tested successfully?

Putin: All of those tests were successful. it’s just each of these weapons systems is at a stage of readiness. One of them’s already on combat duty. It’s with troops.

After roughly 90 seconds, Holt returned and said Kelly will have more reporting from Russia “in the coming days.”

This is not Kelly’s first encounter with Russia’s controversial leader. You may recall that Kelly moderated a panel which included Putin at the St. Petersburg International Economic Forum (SPIEF) last June. She then sat down with Putin for a one-on-one interview at that same conference, which aired during the premiere of her Sunday newsmagazine Sunday Night With Megyn Kelly.