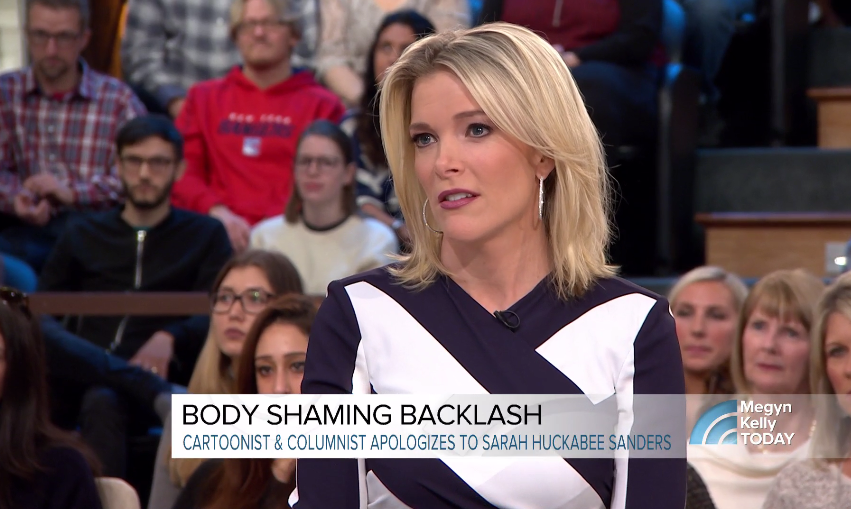 Megyn Kelly may no longer be a Fox Newser, but she’s still more than happy to stick up for her former female colleagues.

Horsey described Sanders as a “slightly chunky soccer mom who organizes snacks for the kids games” and also wrote that she “does not look like the kind of woman Donald Trump would choose as his chief spokesperson.”

The LA Times has included a note at the top of the column with Horsey’s apology:

I want to apologize to Times readers — and to Sarah Huckabee Sanders — for a description that was insensitive and failed to meet the standards of our newspaper. It also failed to meet the expectations I have for myself. It surely won’t be my last mistake, but this particular error will be scrupulously avoided in my future commentaries. I’ve removed the offending description.

This morning, Kelly called him out for that, and for the knocks on her former FNC colleagues. “Does he mean Jamie Colby, who graduated high school at age 16, before becoming a journalist and winning a Murrow Award? Does he mean Lea Gabrielle, who fought as a Navy fighter pilot for our country in Afghanistan before becoming a Fox News personality? Melissa Francis, who graduated with an economics degree from Harvard? Catherine Herridge, who has a Stanford and Harvard degree, and gave part of her liver to an infant child? To me, these are not blonde Barbie dolls in short tight skirts.”

Kelly’s former colleagues took to Twitter to thank her for using NBC’s valuable airtime to defend them.

Thank you @megynkelly. You spoke for every woman @FoxNews this morning. We all need to do better, including you @davidhorsey! pic.twitter.com/Nf21doFndn

Thank you @megynkelly for having @davidhorsey on your show and taking him to task on his offensive comments to @SarahHuckabee and all of the @FoxNews women. @MegynTODAY https://t.co/05RA3zoUiH

I am proud of the strong, beautiful, smart women who I’ve worked with at @FoxNews for 14 years. Many of them are my best friends. When some of you judge us without knowing us you do not define us. You define yourself.

Yes @MegynTODAY THANK YOU. This is my friend, forever @megynkelly – And thank you for posting @HuntsmanAbby – We won’t let nonsense divide us or define us. https://t.co/hStO7u1T9w