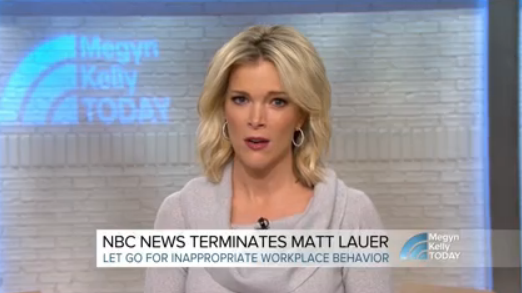 NBC News anchor Megyn Kelly continued NBC News’s coverage of the stunning firing of her former colleague Matt Lauer at the beginning of her 9 a.m. hour of the Today show.

First, Kelly read the internal memo NBC News chairman Andy Lack sent to staff in the overnight hours. Then, Savannah Guthrie and Hoda Kotb‘s initial reaction to the news leading off the 7 a.m. hour was shown. Then, Kelly provided her own thoughts on the matter:

This one does hit close to home. I, too, have known Matt for a while and he’s been a friend and kind and supportive to me in mytransition to NBC News, and I see the anguish on my colleague’s faces. But when this happens, what we don’t see is the pain on the faces of those who found the courage to come forward. And it is a terrifying thing to do. We don’t see the career opportunities women lose because of sexual harassment or the intense stress it causes a woman dealing with it when she comes to work each day. I am thinking of those women this morning, and hoping they are OK. The days to come will not be easy.

We are in the middle of a sea change in this country, an empowerment revolution in which women who for years have felt they have no choice but to simply deal with being harassed at work are now starting to picture another reality to feel that change is within their grasp. As painful as this moment is for so many here at NBC today, at CBS earlier this month, and at Fox News over the last year, in Hollywood this fall, it is a sign of progress; a sign of women voicing their courage and of the erosion of a shameful power imbalance that has been put in place for far too long.

A final note: I have been at another news channel where this happened, as you know.  My experience is that a news organization is bigger than any one person. They all face challenges. They all stumble. But the good ones stay standing and forge forward, fulfilling their mission: Journalism.

According to Kantar Media, Today hauled in a whopping $435 million in revenue in 2015. It remains the most-watched morning show in the ad-friendly A25-54 demo, but ceded it 16-year run as the most-watched morning show to Good Morning America in 2012. Today is an unbelievably important cash cow for NBCU, and choosing Lauer’s replacement is a decision NBC will not take lightly.

Perhaps it will be Kelly. Megyn Kelly Today has gotten off to a slow start in the ratings department (though ratings have been growing in recent weeks). Pairing Kelly with Guthrie in the hard-news 7 a.m. hour would send quite a message.

Kelly is still scheduled to sit down with Business Insider editor-in-chief Alyson Shontell at the IGNITION Conference in New York this afternoon. TVNewser will be there to cover it.