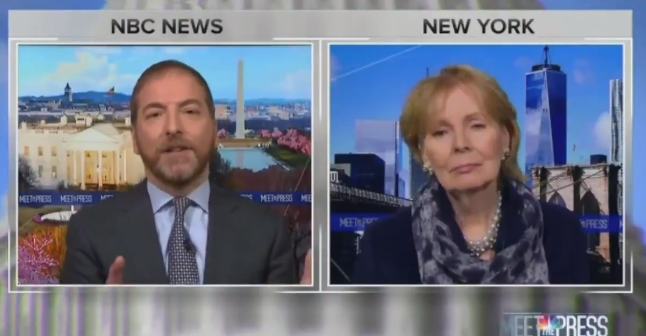 Meet the Press apologized to the Department of Justice yesterday after the broadcast appeared to omit important context in airing a comment made by U.S. attorney general Bill Barr.

On Sunday morning, Todd covered the Flynn news and noted the president’s big tweetstorm. At one point he brought up part of what Barr said to Herridge:

HERRIDGE: “When history looks back on this decision, how do you think it will be written?”

BARR: “Well, history is written by the winner. So it largely depends on who’s writing the history.”

Todd remarked that the comment was incredibly cynical, adding, “He was almost admitting that, yeah, this is a political job.”

However, the second part of Barr’s answer was not shown during the broadcast: “Well, history is written by the winner. So it largely depends on who’s writing the history. But I think a fair history would say it was a good decision because it upheld the rule of law, it upheld the standards of the Department of Justice, and it undid what was an injustice.”

Very disappointed by the deceptive editing/commentary by @ChuckTodd on @MeetThePress on AG Barr’s CBS interview.

Compare the two transcripts below. Not only did the AG make the case in the VERY answer Chuck says he didn’t, he also did so multiple times throughout the interview. pic.twitter.com/PR1ciceMmE

You’re correct. Earlier today, we inadvertently and inaccurately cut short a video clip of an interview with AG Barr before offering commentary and analysis. The remaining clip included important remarks from the attorney general that we missed, and we regret the error.

Perhaps it was just an editorial oversight. However, many conservatives jumped to the conclusion that the broadcast deliberately cut the clip to cast the attorney general in a bad light.

This became easy fodder for the president, who sent out a whopping 108 tweets/retweets on Mother’s Day, a number of which focused on criticisms of Todd and Meet the Press.

Trump, who has made roughly 18,000 false/misleading claims since his presidency began in January 2017, even called for Todd to be taken off the air, tagging the FCC in the process. This won’t happen for myriad reasons, one of which being that Pai has gone on the record as saying that content on a show is beyond the commission’s scope of authority when determining licenses, which are of stations, not networks.

@FCC THIS IS A DISGRACE, EVEN WORSE THAN @NBC USUALLY IS, WHICH IS REALLY BAD. SLEEPY EYES MUST BE FIRED! https://t.co/NWy7WTxH8e

He should be FIRED by Concast. If done by a Republican, would be “prosecuted”. @AjitPaiFCC https://t.co/Lqi3oWEaiP