NEXT:Lester Holt's Interview With Pres. Trump Is On For Tomorrow
PREVIOUS:With Press Pool Being Kept Out of Russia Oval Office Meeting, U.S. Networks Use Kremlin Images 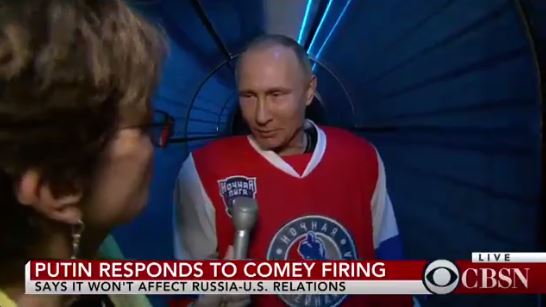 CBS News correspondent Elizabeth Palmer caught up with Russian President Vladimir Putin today in Sochi as the Russian president was suited up, ready to play a friendly hockey match with Russian business leaders and former Olympians.

With music blaring from the Bolshoy Ice Dome, Palmer asked, “How will the firing of James Comey affect U.S.-Russia relations?”

“There will be no affect,” Putin said, via a translator, adding, “Your question looks very funny for me. Don’t be angry with me.”

Putin tells CBS News "we have nothing to do with" firing of Comey, says Trump is" acting accordance with his law" https://t.co/sOwLJ2XsZk pic.twitter.com/4EKRPvNs8x

While it may have been brief, Palmer’s ice-side interview with Putin shows how important it is to have experienced journalists stationed in major foreign capitals. Palmer joined CBS in 2000 as Moscow bureau chief. She now splits time between London and Moscow.