NEXT:CNN Adds Two New Correspondents
PREVIOUS:Weather Channel Is Experimenting With Telling the Stories After the Storm 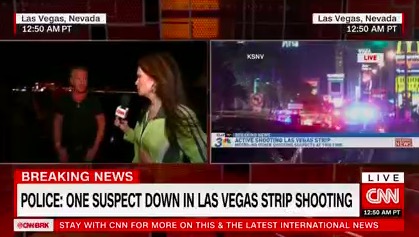 The TV news networks broke in in the overnight hours after news of a mass shooting in Las Vegas.

A gunman, identified as Stephen Paddock, 64, opened fire from his 32nd floor hotel room in the Mandalay Bay firing on the Harvest Festival concert which was happening in an open area across the Las Vegas Strip. About 22,000 people were attending the outdoor event.

The gunfire broke out just after 10 p.m. PT. Police made their way to Paddock’s room. He’d already killed more than 50 people. 400 others were transported to local hospitals. Paddock killed himself as authorities closed in.

Eyewitnesses have been sharing their stories all morning on cable and broadcast news which began coverage in the overnight hours.

ABC News broke in with a special report at approximately 2:20 a.m. At 4:03 a.m. chief anchor George Stephanopoulos began anchoring and Robin Roberts joined at 7 a.m. NBC News’ special report began at 5 a.m. and has been anchored by Matt Lauer and Savannah Guthrie. They will stay on the air until 2 p.m. E.T.