NEXT:Jimmy Kimmel Tries to Get Jake Tapper to Explain His Scoops
PREVIOUS:April 2018 Ratings: CNN New Day and CNN Tonight Each Post Their Best April Ratings Ever 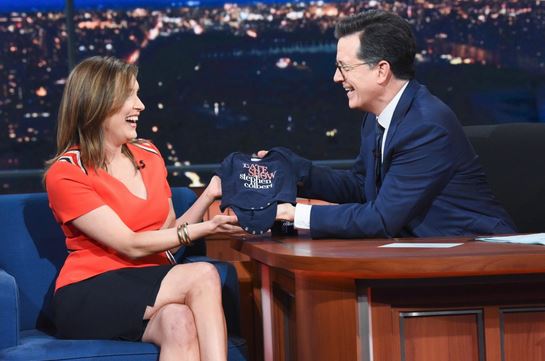 CBS Face the Nation moderator Margaret Brennan made some news of her own, on her first-ever late night show appearance.

At the end of her interview with Late Show host Stephen Colbert, Brennan announced that she and her husband Maj. Ali Iyad Yakub, a Marine Corps judge advocate, are having their first child in September. A baby boy.

Brennan asked Colbert if he has any advice: “My only advice is get some sleep now.”

Brennan and Yakub just celebrated three years of marriage, but have known each other for 20 years, when the met at as students at the University of Virginia.