Whether the person intended to or not, an overnight editorial producer from ABC’s local digital news team helped President Trump’s 2020 re-election campaign and the GOP build their email lists.

The websites for some of the network’s largest affiliates, including New York’s WABC-TV. the most-watched local TV station in the country, picked up a story the aforementioned producer published this morning that promoted “a digital birthday card” for President Trump.

This was noticed earlier today by The Daily Beast reporter Lachlan Markay.

The article, which has since been taken down from ABC’s New York, Houston, Philadelphia and Cleveland websites, read:

To help him celebrate, the GOP has made him a digital birthday card.

Anyone is welcome to sign and leave a personal message; however, an email address is required to send a submission — meaning senders should expect a slew of emails in their inbox.

Those who want to leave their well wishes can do so on the GOP’s website.

Before the article was taken down, if one decided to click on the link above, they arrived at a site that gathers contact data for his 2020 reelection campaign: 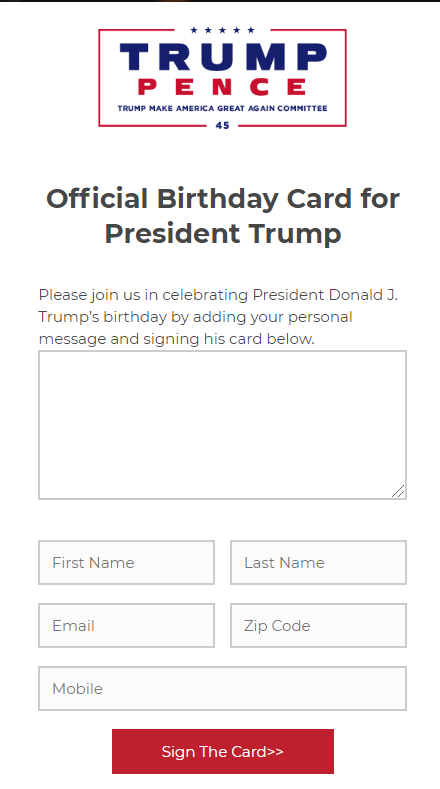 It’s odd for an esteemed news organization to present this type of political promotional content on its websites.

However, as Markay notes, this isn’t necessarily specific to Trump:

Plus, there is fine print below the Trump birthday card, which we have enlarged:

The story about the digital birthday card is apparently now airing on ABC and other local stations across the country, without informing viewers that anyone who “signs” the digital card will have their information entered into the Trump re-election campaign database. No instruction to read the fine print that we’ve included above: