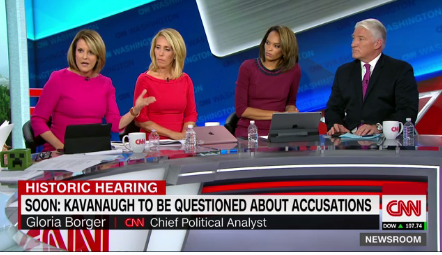 So we have completed what was a riveting morning session and everyone is out at lunch.

Here’s what TV newsers had to say about the morning session of Dr. Ford’s testimony:

Fox News’ Martha MacCallum, who interviewed Kavanaugh earlier this week, remarked during the break, “You have to think that Republican Senators are asking themselves whether doing it this way was a good idea.”

While Dr Ford is coming off kind, credible & smart.She still has not said how she got 2 party or got home and Not one witness verifies her story..Maybe thats coming up next…think @LindseyGrahamSC & @BenSasse need 2 ask questions .they R incisive, but respectful @foxandfriends

“She is speaking from the heart. She’s reliving the worst moments of her life for the world.”

CBS Evening News anchor Jeff Glor remarked: “They’re trying to conduct a political event and a legal event at the same time, and that’s very hard to do.”

According to ABC News’ Tara Palmeri, folks on both sides seem to be stuck in their ways:

Now back to the testimony:

1:35 p.m.: Hawaii Democratic Senator Mazie Horono, a woman who has not been shy in her defense of Dr. Ford and Kavanaugh’s other sexual assault accusers, kicks things off:

The prosecutor goes back to the polygraph. She asks how the polygraph was paid for.  One of Dr. Ford’s attorneys says, “Let me put an end to this…her lawyers have paid for her polygraph.” Another lawyer added, “as is routine.”

When asked by Mitchell about the Washington Post story, Dr. Ford says they were reaching out to her “continiously…and I was not responding.” But then she decided to respond when they started showing up at her home.

Then it’s Cory Booker‘s turn. He told her he feels it’s “unacceptable” how the country deals with sexual assault survivors. “Your brilliance, shining a light onto this, speaking your truth, is nothing short of heroic,” he says, causing her to become emotional, once again. 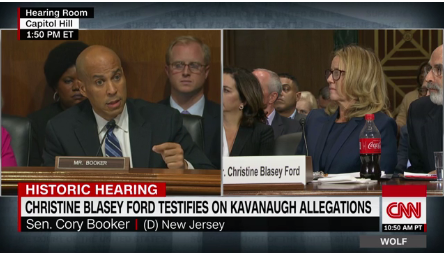 California Sen. Kamala Harris reminded Dr. Ford (and the room) that she is not on trial, reminds the room the she is a trained prosecutor and later remarking “You clearly have nothing to gain…You have been a true patriot…You are a true profile in courage.”

Sen. Harris: “I believe history will show you are a true profile in courage at this moment in time in the history of our country, and I thank you.” pic.twitter.com/Ioam7GrFWQ

At the closing of the Dr. Ford portion of the hearing, Mitchell, the Republican-picked prosecutor, questioned the format (the five-minute interrupted increments), the setting, who advised her to have it in front of senators in Washington, and said a private one-on-one setting with follow-up questions by a trained investigator would have been better.

Louisiana Republican Sen. John Kennedy tried to get a word in edge-wise at the end, but was cut off by Chairman Grassley, and then Dr. Ford’s attorney, asked if she could leave. Chairman Grassley allowed Dr. Ford to go, thanked her for coming in, for answering the questions to the best of her knowledge, and for her bravery, before taking a 45-minute recess.

Grassley thanks Ford for her “bravery” for testifying.

Republican senators leaving the hearing look shell-shocked, ashen and like they know just how bad this was. Meanwhile, Dems: pic.twitter.com/jGkaHiXjkm

Many politicians (and TV newsers) seem to think the Democrats “won.”

But South Carolina Sen. Lindsey Graham isn’t completely convinced, as per his remarks to the press afterwards:

Sen Graham: “The friends on the other side set it up to be just the way it is. I feel ambushed as the majority.” pic.twitter.com/Pp4CS295cn

An emotional Sen. @ChrisCoons says within the last hour 3 women from Delaware have reached out to him and said they are victims of sexual assault, too. #KavanaughHearing pic.twitter.com/dzxePivKnF

NEW: @ABC‘s @CeciliaVega on powerful image from first half of #KavanaughHearings of all the Republican male senators sitting behind their handpicked female prosecutor: “Really speaks volumes of what America just witnessed.” https://t.co/g8KHUpUGyf pic.twitter.com/ByQk1WtRUo

The aforementioned Rick Santorum from CNN:

Rick Santorum just now on @CNN: “let’s just be honest…there are other alternatives than Brett Kavanaugh who could be a Supreme Court Justice”

We’ll be back with Part 3 of the liveblog (part 1 of the Kavanaugh testimony) shortly!