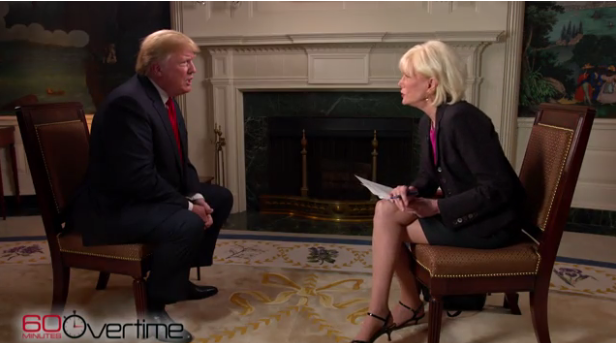 President Trump’s media tour leading up to the 2018 midterm elections continued this past week in the form of a sit-down with veteran 60 Minutes correspondent Lesley Stahl. This was Stahl’s third interview with Trump, and the first since he took up residence in The White House.

This particular sit down appeared to be a bit more combative than we’re what used to seeing between Trump and a journalist, though not hostile. At one point, Trump tried to butter up Stahl by wondering if she was “even bigger” than the late 60 Minutes correspondent Mike Wallace.

STAHL: Tryin’ to soften me up here.

Stahl remarked in her 60 Minutes Overtime piece that Trump “enjoyed the sparring; he said so, and I could tell he enjoyed it.” She also added that Trump came across as far more confident than the last time the two sat down, the most recent one being three days after he won the election, where “I think he was still in shock.”

“I got my share of, ‘Fake news.’ I got– I wouldn’t say he was restrained. He– he came at fake news quite a few times,” remarked Stahl in the Overtime piece.

Stahl also stated the only times the president became really irritated are when she tried to bring him back to the question she originally asked. This is something most interviewers of Trump have had struggled with.

“That got under his nerves a little bit,” Stahl said.

During the interview itself, there was discussion about climate change in light of the Cat 4 Hurricane Michael that destroyed the Florida panhandle and southwest Georgia; what his response would be if Saudi Arabia is indeed behind the killing of journalist; his relationships with North Korea, China, Russia; whether or not he’d “pledge” not to shut down the Mueller investigation; thoughts about members of his own Cabinet and various other West Wing staffers; family separations at the border; and the first lady’s remarks that there are untrustworthy aides at the White House.

“I feel the same way. I don’t trust everybody in the White House, I’ll be honest with you,” Trump remarked.

So why sit down with 60 Minutes now? Stahl had a hunch.