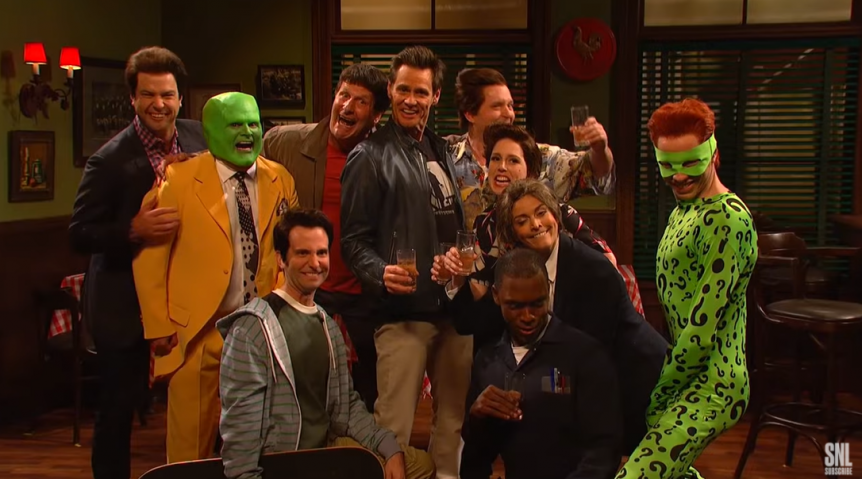 Many are familiar with Jim Carrey from his wild and crazy roles on ’90s comedies such as Ace Ventura: Pet Detective, The Mask and Dumb & Dumber. But Carrey originally made a name for himself as a cast member on the Fox sketch comedy series, In Living Color.

Fast forward 30 years, and the legendary Canadian-American actor is taking his talents to a different sketch comedy series on a different network: NBC and Saturday Night Live.

“There was some interest on his part,” SNL executive producer and creator Lorne Michaels told Vulture in an interview. “And then we responded, obviously, positively. But it came down to discussions about what the take was. He and Colin Jost had a bunch of talks. He and I as well. He will give the part energy and strength, and hopefully it’s funny.”

Maya Rudolph will reprise her role as California senator and vice presidential candidate Kamala Harris, while Alec Baldwin is expected to return to the show this season as President Trump.

On how they’ll cover the election, Michaels said, “I made the decision early on, or at least about a month ago, that we would do something we hadn’t done before, which was five shows in a row. Because there are four debates and then it’s Halloween, and that’s the weekend before the election. And sadly, if the election gets extended, then we’ll be doing six or seven shows in a row.”

The program is planning to have a limited in-studio audience at Rockefeller Center for the upcoming season. The show will work closely with New York Gov. Andrew Cuomo’s team to make it happen.

“We need the audience, obviously,” Michaels told Vulture. “With comedy, when you don’t hear the response, it’s just different. With the kind of comedy we do, which quite often is broad, timing gets thrown off without an audience. And for me, what is most important is when you’re absolutely certain of some piece on Wednesday, and then the dress rehearsal audience sees it on Saturday and tells you you’re wrong. … I think us coming back and accomplishing the show will lead to—I hate to use the word normalcy—but it’s a thing that is part of our lives coming back, in whatever form it ends up coming back. So the physical problems of doing it—number of people who can be in the studio, number of people who can be in the control room, how you separate the band so that they’re not in any jeopardy—all of those are part of the meetings we’ve been having.”

Anna Drezen takes on the head writer role, and the show has added three featured players to its cast for the upcoming season: Lauren Holt, Punkie Johnson and Andrew Dismukes.

Holt is an actor, comedian, singer and improviser. She was a house performer at the Upright Citizens Brigade theater in Los Angeles and starred in the independent web series The Filth as well as the short film Parent Teacher Conference, for which she received a best actress nomination at the Atlanta Comedy Film Festival.

Johnson is a comedian and writer whose recent credits include Space Force, Corporate, Adam Ruins Everything and Bill Burr Presents: The Ringers. She was a New Face at the Just for Laughs Festival in 2019 and is a proud paid regular at the world famous Comedy Store in Hollywood.

Dismukes has served as an SNL staff writer since season 43. He is a stand-up comedian who was selected for the 2017 New Faces Showcase at the Just for Laughs Festival and has performed at other festivals, including Comedy Central’s Colossal ClusterFest and the New York Comedy Festival.