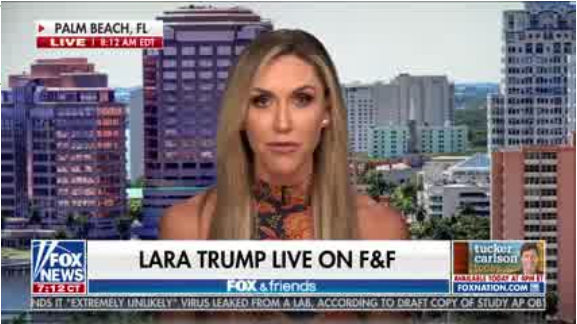 Former senior adviser for the Trump re-election campaign Lara Trump appeared on Fox & Friends Monday morning, where it was made official that she is now a Fox News contributor.

“Let’s bring in Lara Trump, former senior adviser for the Trump campaign, and we have a big announcement,” said co-host Ainsley Earhardt. “She is a new Fox News contributor. Welcome to the family, Lara!”

Trump has appeared across FNC programming many times over the past five years, essentially admitting as much when responding to Earhardt’s welcome. Now, she’s getting paid for her appearances.

“Well, I’m so excited, first of all, to be joining the Fox family, I sort of feel like I’ve been an unofficial member of the team for so long,” said Trump. “You guys know it was kind of a joke over the past five years, I would come there so often that the security guards were like, maybe we should just give you a key.”

Trump’s tenure as Fox News contributor could be brief one, however. She is considering a run for U.S. Senate run in North Carolina. In the past, Fox News has cut ties with paid personalities who decide to run for public office.

Steve Doocy noted her past remarks about possibly running run for Senate, to which the new contributor replied: “Well, Fox has been very generous with me and they had said: ‘Look if that’s something that you ultimately decide to do …’ they are going to work with me on that front and make sure that everything – all the rules are followed and we do everything properly,” Trump said, adding, “Thank you to the Fox team for allowing me to have the possibility … I still haven’t officially made a decision, but hopefully sometime soon.”