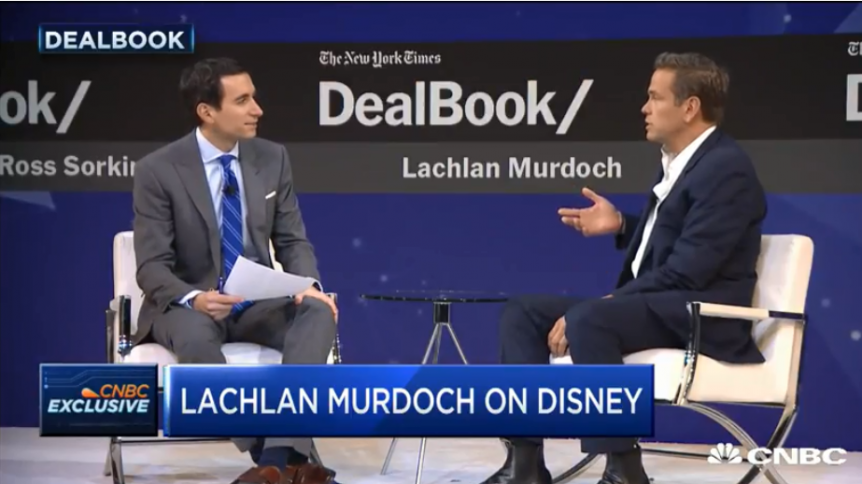 “Are you embarrassed by what they do?” longtime New Yorker critic Ken Auletta asked Murdoch in regard to the network’s prime time lineup:

No, I’m not embarrassed by what they do at all. You have to understand that Fox News is the only mass media company in this country with strong conservative opinion in prime time. It’s the only one; it’s not one of a few, it’s the only one. I frankly feel that in this country, we all have to be more tolerant of each others views. That goes for everyone, everyone in this room, everyone in this country. Everyone on both coasts and in the middle. And that’s the problem, we’ve come to this point where we are more and more intolerant of each other, and that just has to change. Thank you, though.

On the “pipe bomber,” Murdoch said: “I don’t take responsibility for a criminal who was a criminal before Fox News started.”

Murdoch also didn’t totally rule out selling the Journal in the future, saying “I never thought we’d sell the TV or movie studios, so who knows?”

Murdoch was also asked about any potential return to FNC for Megyn Kelly, whose 9 a.m. show was recently canceled and whose days at NBC News appear to be numbered. His answer was essentially an extended version of statements the network has put out about the topic.

“Look, I’m a big fan of Megyn’s. I like her a lot. We didn’t want her to leave Fox when she did…Having said that, I’m very happy with our current lineup on Fox and we won’t be making any changes there.”

He also claimed that Kelly is “damaged” from her initial defense of wearing blackface on Halloween, despite the fact that Kelly made a number of controversial remarks in regard to race over her decade at Fox News, including saying on The Kelly File in December 2013 that Jesus and Santa Claus were white.

Murdoch did call Kelly her “very talented” and said he hopes she returns to media in some capacity.

Murdoch also addressed comments made by creators of Fox TV series who are very much against the Fox News Channel. Seth MacFarlane is a longtime critic of the network, as is Modern Family creator Steve Levitan, who has publicly said he won’t work with the network as long its under the same umbrella as FNC.

“I completely understand where that’s coming from,” Murdoch remarked. He also said Levitan is “a genius storyteller,” but added, “Our biggest critics of Fox News are not watching Fox News. They’re picking up pieces from Twitter, social media, and elsewhere.”