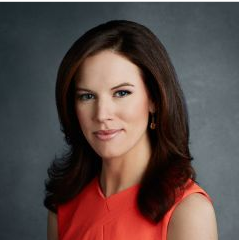 While CNBC’s Kelly Evans has enjoyed anchoring network programming from the New York Stock Exchange, she’s thrilled to be up at the network’s Englewood Cliffs, N.J. headquarters for her new roundtable show, The Exchange.

Because the new 1 p.m. program originates from CNBC Global HQ, Evans is able to tap into the wealth of knowledge inside the building to build her show, something she wasn’t able to do as easily for when she co-anchored Closing Bell.

“The look is a little different, the set is different, and what I’m most excited about is having that roundtable feel to it right there in the studio,” Evans told TVNewser in an interview last Friday. “Since we are at our headquarters in Englewood Cliffs, which is different from Closing Bell, I’m now in the same building as all of the reporters, which is great because in the same way that I might swing by their desks to say, ‘Hey, can you tell me a little bit more about this story,’ now I can do that on-air, and that’s been the really fun part so far.”

Evans says it’s been great to have the opportunity to bring her colleagues onto the show and talk to them, not only about their own stories, but also talk to them about the stories of the day. “You can’t really do that when you’re down at the Stock Exchange…the response has been really great.”

We chatted with Evans about the new program, which debuted Monday Jan. 7, as well about how her background in print helps her on-air, some people in the business she trusts, and her thoughts on the partial government shutdown.

TVNewser: We’re living through a very volatile time right now, and it seems like the timing couldn’t be any better to launch a new show.

Evans: Yes, we are grateful for that. Timing is everything in life, and there was no real rhyme or reason to picking this date, but one of the things that makes doing the news easy is, frankly when there is a lot of news. That’s what makes this show perfect for this moment that we’re in.

You arrived at CNBC nearly 7 years ago after a run as an economics reporter at The Wall Street Journal. How did your experience as a print journalist prepare you for a career as a on-air?

One of the things that came up when we were talking about the new show was ‘News Hub.’ I’m not sure if you’re aware of what that was, but the [Wall Street] Journal when I was there decided after the financial crisis, when a lot of the reporters, including on the econ team, would go on television and talk about our stories of what was happening…Their thought was: “Why don’t we try and do this ourselves?” They had tapped me at the time for what was supposed to be a temporary gig hosting an online “news hub” show, where I would talk to the reporters about their stories. It kind of dawned on us when we were talking about the new show that this is actually kind of an echo of what that was, which is perhaps why I feel so comfortable in this format because when you’re a reporter, whether you’re on-air or in print, your morning story meeting is what decides your coverage, and it’s how you get to the heart of each story and what’s important about it and you pick and choose from there. In a way, the show is kind of like a live version of that. It’s an environment where I’ve always felt extremely comfortable because it’s my roots and what I came up through. I always felt, “Geez, this meeting is so good, if only everyone could over hear that.” Hopefully a little bit of that energy and newsroom vibe is captured with this show, and it does kind of trace all the way back through my earlier career in the print newsroom.

Who has given you the best advice as to take on the role of solo anchor of a brand new business news show?

No one person comes to mind, but it’s really important to have a few close people around you who you always can talk to around really big life decisions. For me, first and foremost that’s my parents, and my husband. Since we’re both in the business, it makes it a little easier to talk about it at home, than if it were more of a foreign concept. Professionally speaking, my agent has played a huge role all of this because I’ve never been involved in something like this before.

The folks at CNBC, from [CNBC chairman] Mark Hoffman down to [CNBC vp of business news programming] Craig Bengtson, who’s pretty new and was instrumental in developing this show, and so many others there. So, I don’t know if I would call it advice, but that’s where we’ve always kind of had a conversation about the right way of developing it.

You have anchored a number of different programs over your 7 years at CNBC: Worldwide Exchange (in London), Squawk on the Street, Closing Bell, Power Lunch, and now The Exchange. How long does it take to really settle into a new hour?

I’m not sure if it’s unique to CNBC, but I’ve always kind of had in my mind is that it really takes two years with a new show. Hopefully we won’t need quite that long, but I do think you have to… I don’t think anyone would say, “oh, we’re going to know after week one or even month on whether this is a success.” If there are some bumps along the way at first, that’s also fine. I look back and laugh when I realize how little I really knew of what I was doing, especially on Worldwide Exchange; and then Closing Bell. Bill Griffeth and also Carl Quintanilla when I was on Squawk on the Street – they were both so understanding. I made a lot of mistakes, and everyday I continued to learn. I’ve kind of been given a lot of rope on that front. Fortunately, this is a patient place, and I work with really nice people. Part of it is that we’re all really excited because the first week has gone really well. There has been a great response to some of what we’re doing. As much as I love that, I also know, it’s also really going to be a year or two before we feel we really know for sure how it’s going.

We’re roughly 3 weeks into the partial government shutdown. I feel like the economic impact has been minimal so far, but my guess is that could change pretty soon. From your sources and from what you have been hearing, is Wall Street nervous right now, or has it not gotten to that point just yet?

No, this is the “same old, same old,” in terms of the politics of it. Look, if it goes another month, then it’ll have a much, much larger effect. I actually think people are now starting to wonder, “OK is this going to keep happening?” Will we get to the point where it’s: “OK, every couple of months, I can’t get my data and I need a private sector source for that…” It’s now becoming so common. I guess it used to be thought of us as a one-off, “oh my goodness, the government might shut down” type of event. Now that it’s becoming more common, I would expect that to create some longer-term reaction. Frankly, even if it shaves several tenths of a percentage point off GDP, that’s no small thing, it’s not a huge thing either. It’s more the individual level, obviously and people who aren’t getting paid, the data that you can’t get and whether it effects tax refunds. I wouldn’t be surpsirsed if at some point, everyone in DC realizes, “OK, the fact that this might become a recurring thing is becoming a bigger and bigger problem, and so let’s try and think about how we can resolve this.” Much in the same way that people keep looking at them to come up with a permanent answer on the debt ceiling.