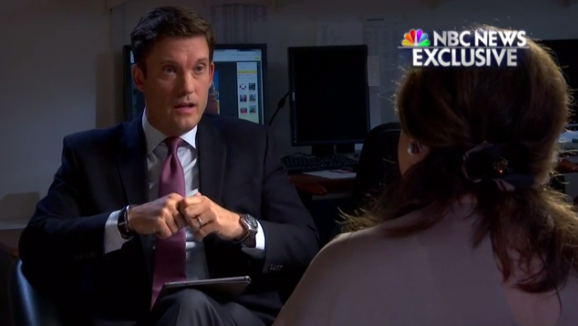 The last time we saw NBC News foreign correspondent Keir Simmons on our TV screens, he was dodging water cannons and fires while reporting on the intense protests at the G20 Summit last Wednesday and Thursday in Hamburg.

Today, Simmons traded in his helmet and button down for business formal attire as he headed indoors for an NBC News exclusive sit-down with Natalia Veselnitskaya, the Russian lawyer who met with Donald Trump Jr. in June 2016. The interview aired this morning on the Today Show.

During their chat, Veselnitskaya denied any claims that she has any connection to the Kremlin’s efforts to aid the Trump campaign.

“I never had any damaging or sensitive information about Hillary Clinton. It was never my intention to have that,” Veselnitskaya told Simmons.

She insists she met with Trump Jr. to talk about the Magnitsky Act, a bill that was passed by Congress in 2012 that endeavored to punish Russian officials responsible for the death of Russian lawyer Sergei Magnitsky in a Moscow prison in 2009, and to prohibit their entrance to the U.S. These sanctions led the Kremlin to ban the adoption of Russian children by Americans later in 2012.

When asked how Trump Jr. seemed to have the impression that she had information about the DNC, she said, “It is quite possible that maybe they were longing for such an information. They wanted it so badly that they could only hear the thought that they wanted.”