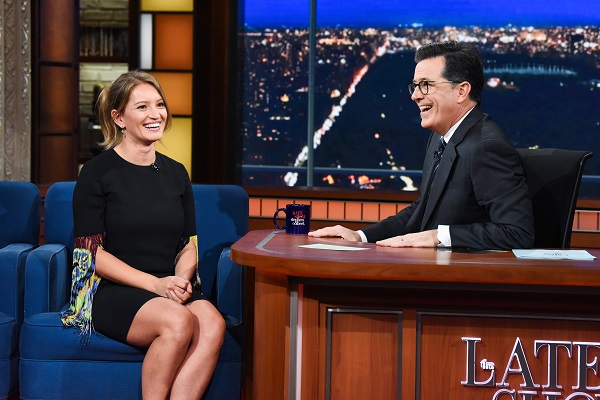 Tur also explained why voters didn’t necessarily care about Trump’s behavior during the campaign: “It is tribalism at its worst. It’s people just deciding, ‘I like this person, and I want him in Office. I don’t care what he did. I‘m going to find any excuse I can to excuse his behavior.'”

She also recalled how some people treated her and the press during the campaign rallies. “We were actually in the center of the room. We would go to these arenas, and there would be thousands of people around us, up in the stands, and we would be dead center in the room, almost like a roman coliseum,” Tur said. “And Donald Trump at one point he was talking about Vladimir Putin, how much he admired him, and he had been asked about Putin killing journalists– and he waved it way, ‘I would never kill journalists…well, maybe, I’m not sure, but I really hate them.’

“Meanwhile, we were in the center of the arena surrounded by 5,000 people and they all turn around and boo and laugh at the idea of us getting murdered,” Tur continued. “It was surreal, bizarre, scary and disheartening, but also thrilling because no one in the country had ever seen anything quite like this, and I got to see it every single day up close.”

Tur elaborated on her comment that “Everyone covering Trump needs to tone it the f**k down.”

“If you’re screaming at everything, if everything is the end of the world, and yes, a lot of it is very, very serious, and I’m not trying to diminish everything with the Russia investigation, with the norms he’s shattering and sexual misconduct allegations,” said Tur. “Yes, those are very serious things, but we need to pick and choose what we get breathless about. If we get breathless about everything, even just a ridiculous tweet, then no one is going to take you seriously and you give fodder to this idea that the media is all out to get Donald Trump, and we’re looking for any reason to criticize him.”

Colbert wrapped the interview by asking Tur to say one nice thing about Trump.

Put on the spot, Tur took a long pause and praised the fact that “his ties are very long.”