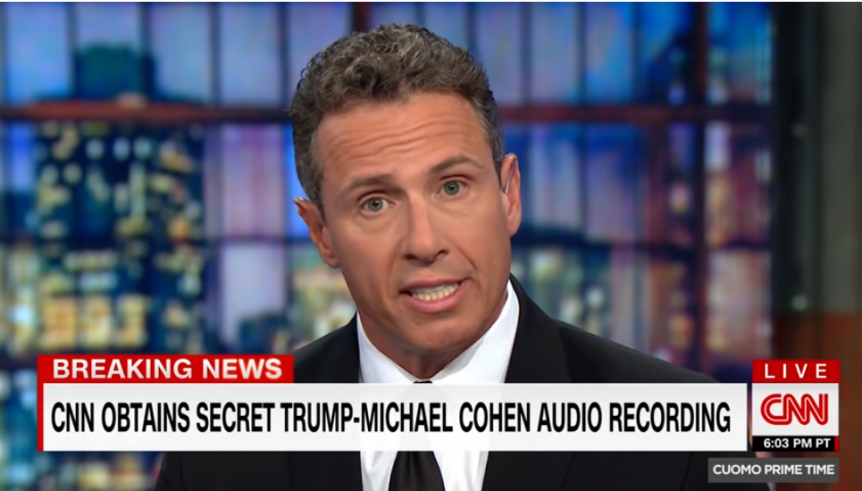 Chris Cuomo‘s new show has provided CNN with a nice ratings bump in the 9 p.m. hour. Yes, Cuomo Prime Time is finishing third in the hour behind Sean Hannity and Rachel Maddow, arguably cable news’s two most popular (and polarizing) personalities, but in July 2018 the program provided CNN with a +17 percent bump among adults 25-54 and +16 percent increase in total viewers vs. the network’s 9 p.m. ratings in July 2017.

It has also turned into the network’s No. 1 show.

Despite another third place finish behind Fox News and MSNBC in prime time, CNN had its 3rd-best weekday prime time in 23 years–only behind 1995, 2009 and predictably 2016–among adults 25-54. The network also touted its victories over MSNBC when it came to the key A25-54 demographic in total day, daytime hours and on weekends.

Back over on the weekday programming front, Erin Burnett Outfront (7 p.m.) ranked No. 2 in the hour among adults 25-54. The same was true for The Lead with Jake Tapper, The Situation Room with Wolf Blitzer at 5 p.m., and the 8 p.m. AC360. CNN Tonight with Don Lemon finished No.3 in the 10 p.m. hour, but managed to post audience growth vs. the previous July.

CNN Original Series continue to thrive on weekends among younger news viewers. The 2000s has performed especially well for the network, ranking No. 1 among 25-54 and 18-34 in cable news within its time period across every episode so far this season. So far in 2018, The 2000s is ranking among the top 10 historical non-fiction series in all of basic cable among 25-54.

CNN once again surpassed MSNBC in total day, daytime and on weekends this month among adults 25-54. The network also had its third-best weekday prime time in 23 years.

On Sunday mornings, Inside Politics with John King (8am) State of the Union with Jake Tapper (9am), Fareed Zakaria GPS (10am) and Reliable Sources with Brian Stelter (11am) all ranked #2 in cable news in their respective time periods, ahead of MSNBC by double-digits among adults 25-54. The 12pm noon edition of State of the Union ranked #1 in cable news among adults 25-54 with 240k, Fox News followed with 220k and MSNBC had 128k.

CNN Original Series continued to post strong ratings during the month of July:

All of Cable:
Among ALL cable networks, CNN ranked #9 in total viewers during Monday-Friday prime time and #10 in total day in July.