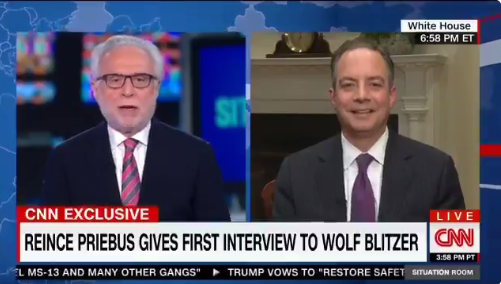 It was a wild month in U.S. politics, and CNN had a tough time keeping up with the competition from a ratings perspective.

July 2016 was a month when the network finished No. 1 in the prime-time demo, due to highly-rated presentations of the Democratic and Republican nominating conventions, terrorist attacks in Nice and a police officer shooting in Dallas.

On a brighter note, CNN was a top 10 basic cable network this past week. It finished as the No. 8 network in weekday prime, and No. 8 in total day, 6 a.m. – 6 a.m. It also defeated MSNBC in total day among adults 25-54 for a whopping 37th consecutive month.

Year to date, 2017 is on pace to be CNN’s best year on record in total day viewers, and its best year in the total day demo since 2003 during the Iraq War.

Anderson Cooper 360 was the network’s No. 1 program of the month in total viewers, followed by CNN Tonight with Don Lemon, Erin Burnett Outfront, The Lead with Jake Tapper, and Situation Room with Wolf Blitzer, in that order.

AC 360 was also the network’s top show in the prime time demo, followed in the category by CNN Tonight, Erin Burnett Outfront, The Situation Room and The Lead.

The network’s weekend prime time programming stood out as well, among adults 25-54, thanks to CNN Original Series (The Nineties, The History of Comedy and Declassified). 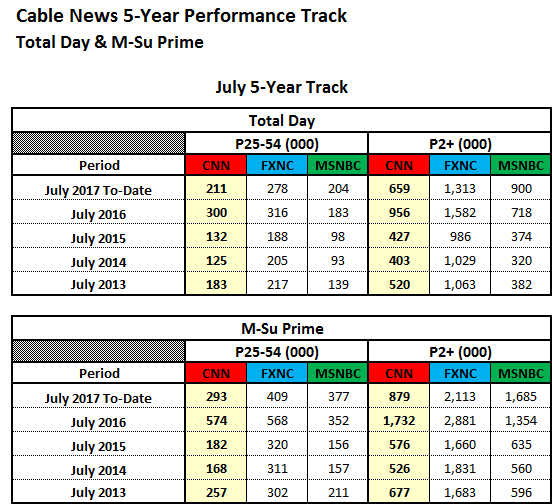 CNN was the #2 cable news network in Total Day in July, beating MSNBC for the 37th consecutive month in the demo adults 25-54. That is CNN’s longest winning streak over MSNBC in more than seven years (dating back to January 2010).

In addition, CNN was the #1 network in cable news in weekend prime time (8-11 pm) among adults 25-54, largely on the strength of its CNN Original Series (The Nineties, The History of Comedy and Declassified).

Specifically during the conventions, CNN ranked #1 among all cable networks during the week of the DNC and #2 during the RNC in M-Su/M-F Prime among both adults 25-54 and total viewers. MSNBC lagged far behind CNN and Fox News.