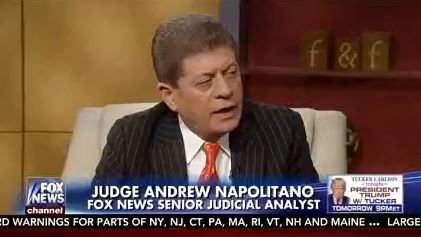 The news-opinion divide was compromised last week when FNC senior judicial analyst Judge Andrew Napolitano touched off an international incident with America’s greatest ally. It didn’t help when Pres. Trump cited the Judge’s reporting which the White House hoped would corroborate Trump’s claims that Trump Tower was wiretapped during the campaign. Smith distanced the news side of Fox from Napolitano’s reporting of Friday: Fox News cannot confirm Judge Napolitano’s commentary.” From Ellison:

“The key thing Judge Napolitano did was to say ‘Fox News is reporting that…,’ and he can’t say that,” this insider told me. “That breaks the trust, and you saw what it cost him,” the insider told me. “He is not a reporter and knows he’s not a reporter.” This person noted bluntly that the judge’s comments, and Trump’s parroting of them, have created an internal headache: “It’s a disaster. It’s a nightmare.”

Despite the headaches for the journalists at Fox News, the main risk to the Murdochs (other than credibility) is the effect the backlash could have on their proposed deal to purchase outright Sky News, which was scuttled once before in the wake of the phone-hacking scandal. It could also call unwanted attention to a number of deeper cultural problems that lie beneath the network’s thriving ratings.