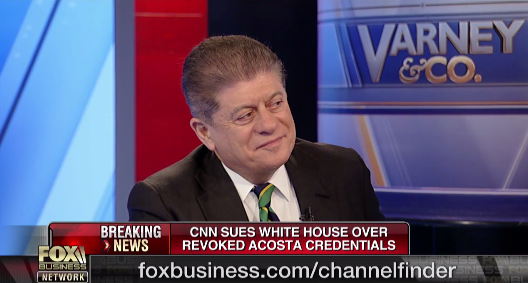 This comes after a lawsuit filed Monday by Fox Business production assistant John Fawcett, who alleges that he was sexually harassed in an elevator by the Judge in 2019.

In his lawsuit, Fawcett alleges senior execs were aware of the misconduct, but declined to take further action. Fawcett also alleges that Napolitano also harassed other male employees, but HR also declined to investigate those incidents.

The 27-year-old FBN staffer has been working as an associate producer on Larry Kudlow‘s Fox Business show, and was previously a PA on Lou Dobbs Tonight before that show was canceled. Fawcett remained on staff after Dobbs’ exit, and alleges Kudlow has repeatedly made racist and sexist remarks during staff meetings, going so far as to block an appearance by Congressman Byron Donalds because the Congressman is Black.

Fawcett alleges that FBN programming vp Gary Schreier participated in multiple conference calls and meetings in which Kudlow made inappropriate comments, including the incident where Congressman Donalds was blocked from appearing on FBN’s 4 p.m. hour. However, according to Fawcett, Schreier never reprimanded or took any sort of action against Kudlow.

Fawcett also alleges that Kudlow said he wanted to have a “three-way” with Fox News anchor Sandra Smith and said he enjoyed seeing Fox Business reporter Susan Li on set.

Fawcett is being represented by Ty Clevenger, the same Texas-based attorney who is representing former Fox News anchor Ed Henry in a separate lawsuit filed a month ago against Fox News, CNN and NPR.

A Fox News spokesperson provided TVNewser with the following statement concerning this matter:

“Upon first learning of John Fawcett’s allegations against Judge Andrew Napolitano, Fox News Media immediately investigated the claims and addressed the matter with both parties. The network and Judge Napolitano have since parted ways. We take all allegations of misconduct seriously, are committed to providing a safe, transparent, and collaborative workplace environment for all our employees and took immediate, appropriate action.

Furthermore, the additional allegations laid out in this claim are completely baseless and nothing more than a desperate attempt at a payday by trying the case in the court of public opinion as the complaint does not meet the standards of the law. We will defend the matter vigorously in court.”