NEXT:Tuesday, May 25 Scoreboard: Fox News Remains No. 1; Tucker Carlson and Rachel Maddow Have 2 Most-Watched Shows
PREVIOUS:Jake Tapper: 'I Don’t Think Anchors Should Have Positions on Policies Per Se, But I Think We Can Have Positions on Hypocrisy and Lies' 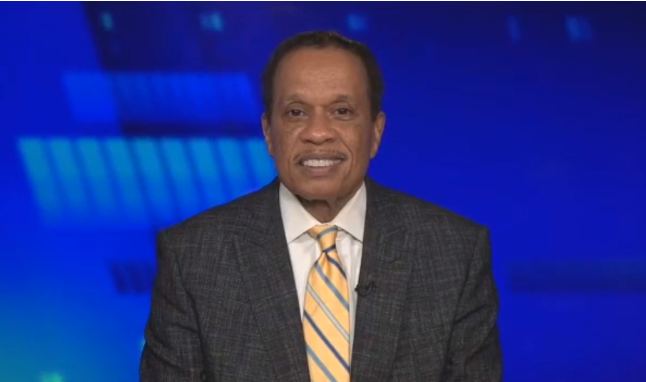 Juan Williams announced Wednesday on-air that this was his final day hosting The Five.

“This is my last day hosting The Five. Covid taught me a lot of lessons. As the show goes back to the New York studio, I’ll be staying in D.C.,” said the liberal commentator.

Williams will maintain his longtime role at Fox News as a senior political analyst, based out of D.C. For seven years, he was the sole left-leaning voice on the Fox News panel program, and brought a unique perspective to the broadcast.

“The show’s popularity has grown every single year so thank you,” said Williams. “Thank you so much, to you, the viewers. Thank you.”

Williams has served as a Fox News political contributor since 1997. He is also a columnist for The Hill, and for decades had a column at The Washington Post.

The Five will return to its studio at Fox News headquarters in New York this coming Tuesday, and use rotating liberal co-hosts until a liberal replacement for Williams is named.

Former Tennessee congressman and MSNBC contributor Harold Ford Jr. recently joined Fox News as a contributor, and is seen as a strong contender to take on the left-leaning co-host role.

Megan Albano, the executive in charge of The Five and vp of Fox News weekend programming, said in a statement: “As Juan Williams announced on air today, he will be leaving The Five to live in Washington, DC full time. We are incredibly grateful for his commitment to the show and its success over the last several years. As we started planning The Five’s return to its New York City studio at our headquarters a few months ago, Juan decided to stay in Washington, DC permanently. We accommodated his request, understanding and appreciating his desire to remain closer to his family and recognizing that a remote co-hosting role on a roundtable in-studio program was not a long-term option. While we will miss his insightful contributions each night and look forward to welcoming him on set whenever he’s in New York, we are pleased to have him continue his longtime role as a senior political analyst with Fox News Media.”

The lone liberal on “The Five,” Juan Williams, is leaving the show, today.

“Covid taught me a lot of lessons. As the show goes back to the New York studio, I’ll be staying in DC. I’ll be working for Fox out of Washington. My work as a Fox News political analyst will continue.” pic.twitter.com/WMf1MNRBec