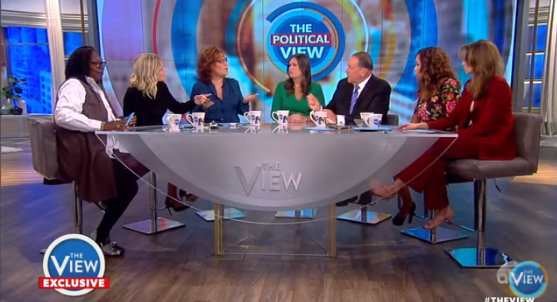 White House press secretary Sarah Huckabee Sanders and her father, former Arkansas Gov. Mike Huckabee appeared on ABC’s The View this morning. The back-and-forth between the family and the panelists was often contentious and sometimes awkward. The interview lasted three segments, a rarity for the program.

The discussion seemed innocent early on. Sanders’s status as the first mother to serve as White House press secretary was brought up, and she mentioned her young kids’ propensity to pepper her with questions prepared for her current role.

Behar, not shy about expressing her progressive views, didn’t hold back throughout the interview.

“Who approved you coming here?” Behar asked Sanders. “The Mooch? Is that why he was fired? I’m shocked that you’re here, both of you.”

She also asked Sanders about Pres. Trump: “Is the media not supposed to report the fact that 95 percent of what he says is a lie?,” and added, “I feel sorry for you that you have to go out and defend these lies every day.”

Sanders went on to accuse Behar of “doing exactly what we were talking about in pushing a false narrative.”

“We’re creating false perceptions about the president and frankly inhibiting his ability to succeed. We should be championing for his success because his success is American success,” continued Sanders.

Behar also asked why Sanders often says “I’ll get back to you” during televised press briefings.

“A lot of times I get back to the individual reporter. It may not be on camera. I have reporters in and out of my office all day,” Sanders said. “I’m in contact with them 24 hours, 7 days a week, constantly responding to questions.”

Some of the panelists criticized Pres. Trump’s past actions and moves while in office, especially his treatment of minorities. Goldberg asked Sanders why her boss insisted for so long that Obama wasn’t born in this country and did not hold office legally.

Gov. Huckabee said that ex-Arizona sheriff Joe Arpaio, who was recently pardoned by Trump, is not racist, and said that Trump is called “racist,” yet he’s appeared on The View several times. Goldberg’s retort?

The former governor was able to talk about his new program on Christian-themed Trinity Broadcasting Network, which he claimed “would not be a show where people are talking over each other and screaming and yelling.”

The interview ended on more of a light-hearted note, with Haines asking Sanders what she thought when she saw the photo of the president looking up at the eclipse without glasses. “Maybe he has superpowers we don’t know about,” Sanders joked.

Goldberg ended the broadcast by saying that Hillary Clinton would appear on the program the following Wednesday.