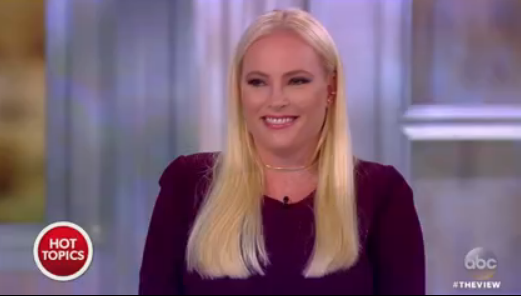 The AP’s Dave Bauder speaks with The View co-host Meghan McCain, referring to the conservative member of the ensemble show as “a reason to watch” the program.

Bauder writes about how her father, Arizona Sen. John McCain, pushed her to pursue the opportunity last fall despite her early reservations. The elder McCain apparently watches the program every day. “My dad always says that a fight not joined is a fight not enjoyed, and I feel that way,” she told the AP. “I like the debate, and these are amazing adversaries to have every morning. That’s fun.”

Despite being on total opposite sides of the political spectrum, longtime host Joy Behar has become a fan of the newest co-host. McCain joined the show in October 2017.

“I like her a lot,” Behar said. “She’s a very intelligent girl. She has qualities in her personality that I admire in myself. For example, she’s very direct. She does not take hostages. She just says it, moves on and I like that about her.”

Two of McCain’s better moments since joining the program at the start of the calendar year:

Her takedown of Fire & Fury author Michael Wolff was well-researched and appeared to take him by surprise, given his initial dismissive attitude toward her. McCain couldn’t hold back tears when former Vice President Joe Biden talked about his son’s death from the same brain cancer that McCain’s father has. Biden held her hand to comfort her.

It still felt somewhat surreal a few weeks ago when McCain took the side of Trump’s fans in an argument with conservative commentator Tara Setmayer. McCain blew up at her for making reference to a “cult” of people who blindly follow Trump no matter what he says, suggesting that’s disrespectful to the president’s supporters.

A bemused Behar loved it. “I enjoy Republican on Republican crime,” she quipped.

Not one of McCain’s finest shows, she came off as a bully. Setmayer didn’t return messages seeking comment.

Speaking of Fox Newsers and The View, Yashar Ali writes for HuffPo that Fox & Friends Weekend co-host Abby Huntsman is in talks to replace Sara Haines at The View. This would give the program two conservative voices. McCain and Huntsman are longtime friends and in addition to their stints at Fox News, they previously crossed paths at MSNBC. Huntsman, daughter of U.S. Ambassador to Russia and former Utah governor Jon Huntsman, joined FNC as a general assignment reporter in 2015 and was named F&F Weekend co-host in December 2016.