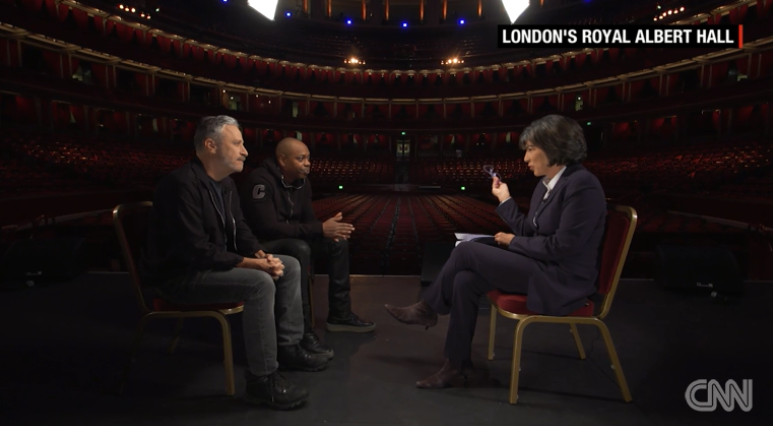 Comedy icons Dave Chappelle and Jon Stewart sat down with Christiane Amanpour inside London’s famed Royal Albert Hall to promote their comedy tour across Europe. As you might have expected from this trio, the discussion was a fascinating one that touched on the intersection of comedy, media and U.S. politics.

No one critiques media quite like Stewart, and he thinks journalists are taking Trump’s attacks “personally” and instead of actually questioning his policies, they’re questioning the man himself, which then allows him to control the narrative.

I think that journalists have taken it personally. They are personally wounded and offended by this man. He baits them, and they dive in. And what he’s done well, I thought, is appeal to their own narcissism, to their own ego … Because the journalists stand up and say, “We are noble! How dare you sir!” And they take it personally, and now, he’s changed the conversation to not that his policies are silly or not working or any of those other things — it’s all about the fight. He’s able to tune out everything else and get people just focused on the fight. He’s gonna win that fight.

Amanpour understandably pushes back, saying a journalist’s job is to fact check and seek out the truth and basically says that the idea of journalists not taking offense at Trump’s direct and literal threats isn’t reasonable.

Stewart later remarks that Trump is a salesman who changes his pitch depending on who he is on front of (something he’s been accused of in the past), “except he doesn’t realize it’s all being recorded.”

His pitch to that audience is: “It’s us versus them…we’re all the victims of this liberal media, of these soft journalists who come out here and lie about us; we’re really great people…” And that’s what he pitches to them, and if you ask him about it, and you say: “Do you think that’s OK to body slam a reporter?” He’ll probably say “No, no, no, I was joking, it was a little joke I was making in front of friends.”

Amanpour pointed out that Stewart never took Trump or his candidacy seriously. He was host of The Daily Show in June 2015 when Trump announced his candidacy, and at the time called it a “gift from heaven” because of all the jokes that would come from it.

Stewart expressed a similar sentiment when Trump previously considered a run at the presidency, telling Bill O’Reilly in 2011:

I pray that he runs. He puts his name on everything he owns; the only other people who do that are six-year-olds. He has his name on a helicopter. Who does that? Does he lose it in the parking lot? He has silly hair and crazy thoughts. He spends his day arbitrating arguments between Meatloaf and Gary Busey.

I could put another wing on my house if that guy runs.

Because most of the political discussion is so binary, and I’m way more interesting than that. Most people are, if you talk to them. I hear people say “Families are not speaking to one another because of politics” — that sounds insane to me. There are tons of people I love and respect that I completely disagree with.

He did note that Trump is  “getting too much credit” in terms of this divisive, angry era we’re in. “He’s not making the wave, he’s surfing it,” Chappelle says, and he also doesn’t really buy that Trump won because of Russia, joking “Is Russia making us racist? Is that who’s doing it? Okay, thank goodness, I thought it was us.”

On why he said he’d give Trump a chance, Chappelle remarked:

I think I said the right thing at the right time, you know what I mean? I think that we had to kind of re-calibrate and kind of put things in perspective. I’m a black American, so these feelings that people felt right after the election — we felt that many elections consecutively.

Here’s the full interview, which I recommend watching: