NEXT:Evening News Ratings: Week of Jan. 1
PREVIOUS:In Their First Week As Co-Anchors, Savannah Guthrie and Hoda Kotb Are No. 1 in the Morning 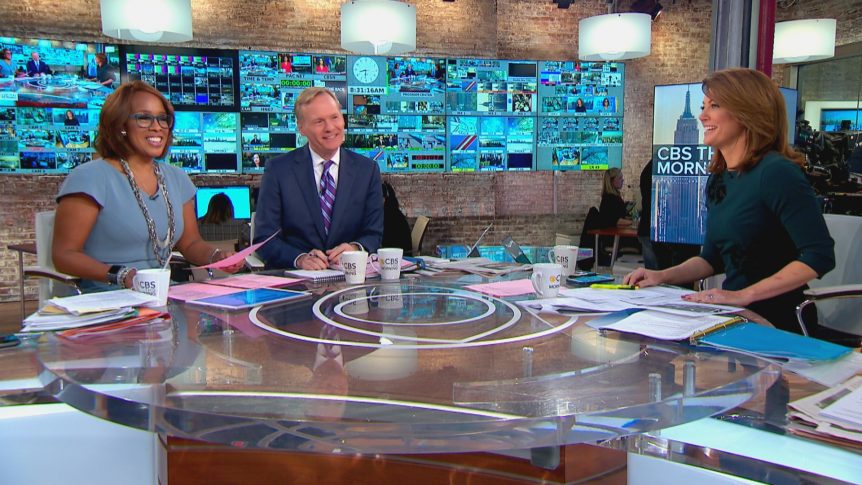 CBS News has found its permanent replacement for Charlie Rose on CBS This Morning: John Dickerson.

The Face the Nation moderator will take his talents from Sunday mornings in Washington to weekday mornings in New York, joining Gayle King and Norah O’Donnell as the newest co-host of CTM starting tomorrow.

“John’s impressive track record and strong all-around journalism extends our commitment to real news coverage every morning at CBS News,” CBS News president David Rhodes said in a statement. “Gayle and Norah continue to show tremendous leadership on our morning broadcast each day. Colleagues, newsmakers and peers all appreciate the depth and context John Dickerson brings to every discussion of the day’s events – together with his co-hosts, he will project our best values on every broadcast.”

“Few people possess John’s intellect, curiosity and journalistic chops,” said CTM ep Ryan Kadro. “He’s the perfect complement to Gayle and Norah and will help us continue the momentum CBS This Morning has achieved over the last six years.”

“On the campaign trail, I’ve collected compliments about CBS This Morning’s commitment to the news for years now,” Dickerson said. “Every time I’ve been on the show, I haven’t wanted the conversation with Norah and Gayle to end when my segment does. Now it doesn’t have to.”

Unlike ABC’s George Stephanopoulos, who anchors both Good Morning America and This Week, Dickerson will transition off CBS’s Sunday public affairs show Face the Nation as the network seeks a new host.

Dickerson joined CBS News in April 2009 as an analyst and contributor. He became Face the Nation moderator in June 2015, taking the reins from the legendary Bob Schieffer, and added the title of CBS News chief Washington correspondent to his resume  in March 2017.

Dickerson has worked as a reporter in Washington since 1995, covering the White House, Congress and economics. Previous stops have included Slate (where he remains a contributor to the The Political Gabfest), and a 12-year run covering politics for Time magazine.

Here is Rhodes’s internal memo to staff regarding the news:

Terrific news this morning—John Dickerson will be joining Gayle King and Norah O’Donnell as a co-host of “CBS This Morning.” John starts tomorrow at the table in New York. The release is below.

With John, Gayle, and Norah together we will be doubling down on serious news coverage. That’s what we’re all committed to at CBS News. Our three co-hosts together will represent those values to the audience every morning. Ryan Kadro is speaking with the CBS This Morning staff now about the plans for Wednesday’s broadcast.

John is relocating to New York full time—trading one eight-days-a-week job for another. His work is impeccable on television, online, and in print—he’s earned his reputation for substance and preparation as both an interviewer and a field reporter.

Norah and Gayle noted CTM’s sixth anniversary this morning. They have built a tremendous connection with a consistently-growing audience. We’re confident that today’s announcement will only strengthen their connection. Our co-hosts and the whole CBS This Morning team have done a terrific job through the last six years and especially through this transition.

John will anchor “Face the Nation” at least this weekend and we are working with Mary Hager on the important broadcasts leading up to State of the Union later this month. I’ll be in Washington part of this week as we start the conversation about what’s next for “Face.” We have terrific correspondents in Washington and we will be ready for whatever comes along.

Let’s keep giving them real news in the morning—congratulations John.