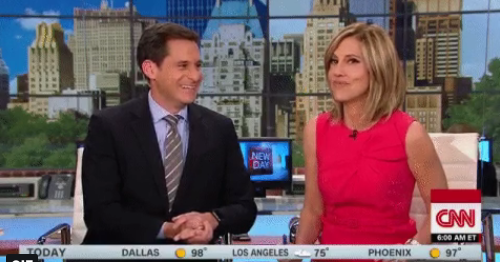 John Berman was fired up for his first official day as CNN New Day co-anchor alongside Alisyn Camerota for a variety of reasons. But what he seemed to be the most excited about on day one was getting the “James Earl Jones” treatment, a crowning achievement for any CNN staffer.

“That sounded awesome. That was Darth Vader. That was James Earl Jones just saying my name … Actually, can I hear it again?,” Berman exclaimed at the top of his first broadcast.

Berman reacted again at the top of the 8 a.m. hour:

“It never gets old … I love the way he says my name”: @JohnBerman might not be used to New Day’s James Earl Jones intro yet, but he will be soon because he’s Alisyn Camerota’s new co-anchor! Catch them both from 6-9a ET every weekday morning. pic.twitter.com/aoGJYvmGEA

1st show in the big chair. I’ll try to answer questions during the debut. So fire away!@NewDay pic.twitter.com/cvKxPY7kfl

Before taking over New Day co-anchor duties for Chris Cuomo, who is getting his own prime time CNN show, Berman had most recently served as co-anchor of CNN Newsroom with Poppy Harlow in the 9 a.m. ET hour. Prior to that, he co-anchored Early Start with Christine Romans, At This Hour with Kate Bolduan, and frequently subbed for Anderson Cooper on AC360. Before arriving at CNN in 2012, Berman had been an ABC Newser since 1995, frequently appearing on all of the network’s news programs, and also had a stint as head writer for World News Tonight with Peter Jennings in the late ’90s.