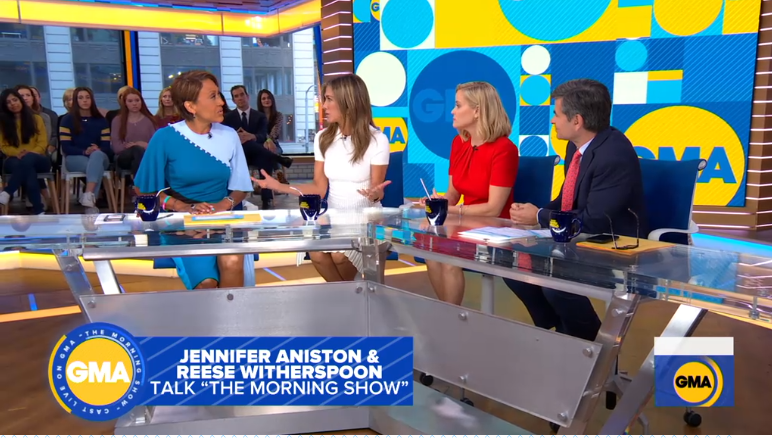 During their appearance on Good Morning America this morning, stars and executive producer of the new Apple TV+ series The Morning Show, Jennifer Aniston and Reese Witherspoon were asked by GMA co-host George Stephanopoulos what surprised them the most when they visited GMA to do research for their roles.

“The insanity that takes place from 5 in the morning until 7,” said Aniston. “It’s very quiet, very still and the halls are slowly starting to buzz…and then this engine that just stars to ‘go,go,go,go;’ and I don’t know how anything actually gets going at 7 a.m…it’s just brilliant. Lots of respect to ya’ll.”

Witherspoon plays a young, up-and-coming reporter on the fictional morning show, who joins the program after Carell’s character leaves. Witherspoon’s profile is rising, while Aniston, now the sole host, seems to be seeing her stock falling; at least that’s the case early on.

Roberts brought up the fact that the project had been put on hold for a bit in order to incorporate the #MeToo movement into the story line.

“It would be completely irresponsible if we hadn’t incorporated it [#MeToo] into the show, because that’s what our show was about – this world, and that’s what was happening in the world,” said Aniston. “So, we took pause and figure out how to incorporate it in the perfect tone that we wanted to, which was not black and white, allowing people to have perspective because everyone was trying to figure out what was this new normal.”

Aniston and Witherspoon also talked about support of women in media leadership and production roles.

“I think it’s an interesting time where women are really stepping into leadership positions that they never expected to be in before,” said Witherspoon. “The world didn’t tell us that we were supposed to be leaders, we never thought those opportunities would come and now here we are, and I think a lot of women are stepping up or being asked to step up and I think that is fantastic.”

Aniston added, “The voices have always been there, it’s just now they are being allowed to use them.”

The Morning Show represents Aniston’s return to TV since NBC’s Friends ended in 2004. Witherspoon, on the other hand, recently scored an Emmy nomination for HBO’s Big Little Lies.

The show, which officially debuts this coming Friday, Nov. 1, is inspired by Brian Stelter’s 2013 book Top of the Morning. Stelter is a consulting producer on the series. The CNN host says he will not be involved in any CNN Business coverage of the series.