NEXT:Here's Who Will Appear on Fox Nation
PREVIOUS:Here's How TV News Is Covering Hurricane Florence

It was only a matter of time: Former CBS News chairman and 60 Minutes executive producer Jeff Fager is leaving the company “effective immediately.”

CBS News president David Rhodes made the announcement official in a memo sent to staff today at 1:31 p.m. ET. 60 Minutes executive editor Bill Owens is managing the 60 Minutes team, while Rhodes and Ingrid Ciprian-Matthews will search for the new permanent 60 Minutes ep.

Rhodes said the move “is not directly related to the allegations surfaced in press reports. …However, he violated company policy and it is our commitment to uphold those policies at every level.”

CNN’s Brian Stelter was first to report the news.

Fager, who also served as CBS News chairman from February 2011-November 2014,  worked on 60 Minutes for more than half of its existence, and penned a history of the program: Fifty Years of 60 Minutes: The Inside Story of Television’s Most Influential Broadcast, which hit bookshelves in October 2017.

Jeff Fager is leaving the company effective immediately. Bill Owens will manage the 60 Minutes team as Ingrid Ciprian-Matthews and I begin the search for a new executive producer of the program. 60 Minutes is the most significant news broadcast on television. We are fortunate to have incredibly talented journalists in place whom we know will continue to deliver our defining investigative work.

This action today is not directly related to the allegations surfaced in press reports, which continue to be investigated independently. However, he violated company policy and it is our commitment to uphold those policies at every level. Joe Ianniello is in full support of this decision and the transition to come.

The exit may have not have been “directly related to the allegations surfaced in press reports,” but the timing sure is curious.

Six weeks ago, The New Yorker published an bombshell story from Ronan Farrow in which a half dozen accused now-former CBS Corp. chairman and CEO Les Moonves of sexual harassment and intimidation going back several decades, and 19 current and former CBS staffers said that Fager enabled harassment at CBS News.

The New Yorker published a follow-up story from Farrow on Sunday in which six more women allege sexual assault and harassment on the part of Moonves, and a former CBS intern alleges that Fager groped her at a work party.

Farrow spoke to producer Sarah Johansen, who was a CBS intern and said Fager had groped her at a work party during her time there. Johansen said she decided to speak up because she “can’t believe he’s back there,” and called 60 Minutes “one of the most sexist places I’ve ever worked.”

Moonves departed the company three days ago, and Fager, a legendary television news executive and only the second ep in the long and storied history of 60 Minutes, is now out as well.

Fager has since provided a statement to CNN, denying allegations printed in The New Yorker to the very end: 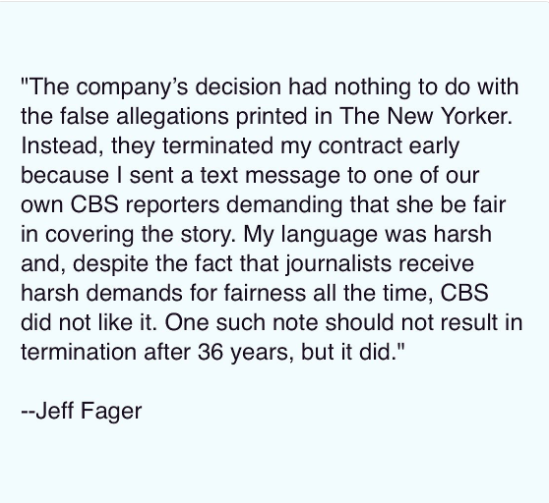