NEXT:Mika Brzezinski Knew 'Five Minutes In' That Morning Joe Was Going to Be a Success
PREVIOUS:Laura Ingraham Gets Fox News Show at 10 p.m.; Sean Hannity Moves to 9 p.m. 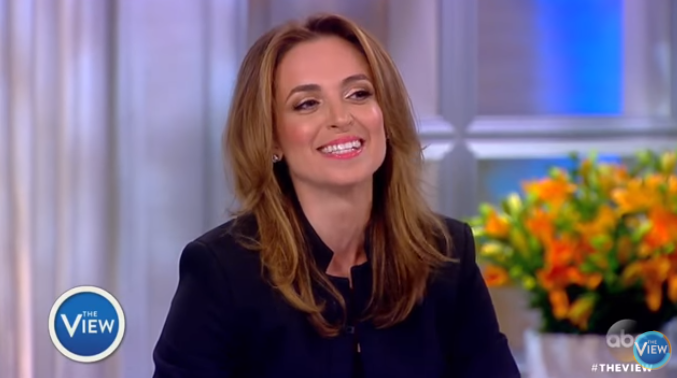 Jedediah Bila announced this morning that she is leaving The View.

“This has just been an amazing journey and I appreciate all of you. I want to thank the viewers, even the ones that write me hate tweets,” she said on-air.

There will be a number of guest co-hosts in the days ahead. White House communications director Anthony Scaramucci will join the panel as a conservative voice this coming Friday.

Bila was previously a Fox News contributor who left the network in August 2016 and became a permanent co-host on The View during its 20th season.

Could The View turn to another former Fox Newser to be its next conservative voice? CNN is reporting that Meghan McCain, who left Fox News last week, is in “late-stage talks” to join The View.

An ABC News spokesperson declined to comment on the CNN report.

The popular female talk panel program has been in search of a permanent conservative voice ever since Candace Cameron Bure left the program last December.

A source tells TVNewser that the program hopes to find a permanent replacement within the next couple of weeks, and that McCain is indeed on the short list.

As some of you heard this morning at our meeting, we have some bittersweet news to share. Jed is leaving our show, and today is her last day. She has new opportunities on the horizon, including her new book.

She’s been a spirited voice at the table over the past year, asking smart questions and challenging us all to think.

We want to thank Jed very much for all of her contributions and wish her great success with the next step in her career.

She will always be part of The View family, and we’ll welcome her back to talk about her new projects.

Please join us in thanking Jed for her hard work, her dedication and her voice at the table.