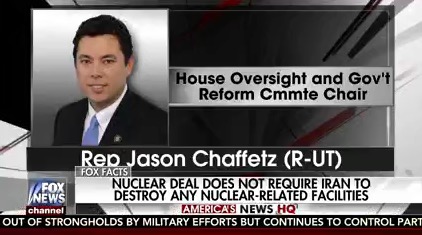 Rep. Jason Chaffetz (R-UT) announced he will be leaving Congress before his term is up. And Washingtonian reports he may have found his next private-sector job.

According to two GOP lawmakers who have spoken to Chaffetz directly and four senior House Republican aides, Chaffetz has been telling people he’ll take on what one source calls a “substantial role” in on-air talent at Fox News Channel, possibly as early as July, amplifying whispers that Chaffetz will not finish out his current term.

Chaffetz announced last month that he would not seek re-election. This is not the first time, and probably won’t be the last, that a member of Congress has made the move to cable news hosting. Former Ohio Congressman and current Gov. John Kasich, who was also the 2016 GOP nominee runner-up, hosted a weekend show called Heartland on Fox News from 2001-2007.