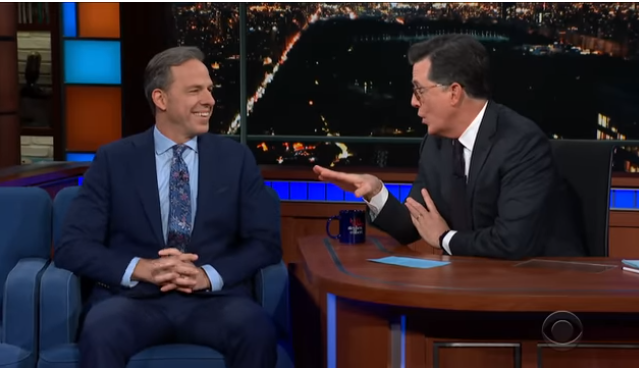 CNN’s Jake Tapper has become a popular guest on CBS’ The Late Show With Stephen Colbert, appearing several times over the past year or so, and providing the audience with his insights into what exactly is happening in Washington. Perhaps most importantly, he does so with humor.

Later, they discuss Tapper interviewing his kids for a feature in Men’s Health:

Colbert: In Men’s Health, you interviewed your kids about having you as a dad … I‘m not sure if I would want that news, to know the unvarnished truth there. What did you learn about you as a father?

Tapper: Men’s Health asks people to write about being a dad and I’m not very good about writing books or articles about myself, so I thought it would be easier if I interviewed them and just do the transcript. They were pretty honest, unfortunately.

Colbert: Really? What did you learn?

Tapper: I learned my son has absolutely no regard for what I do.

Colbert: That’s fitting. What about your daughter?

Tapper: Then I got up and he wrote on the computer, “hi, Butt Man.”

Colbert: Does he have a packet? We’re always looking for writers around here. That’s good; Butt Man is good.

Tapper: Yeah, he’s got a three-episode deal on Comedy Central.  And then my daughter was, again, just completely—you know, “What flaws do I have as a dad?” She said, “You spend too much on your phone, you talk too much about current events.”

Colbert: Wow, they had those ready to go

Tapper: I asked them, and they answered.

Colbert: Which is the angry eyebrow?

Tapper: I think they’re both angry. I think the angry eyebrow, as I understand it, is just the wrinkle between the eyebrows which emerges when I’m angry.

Tapper: Yeah, when I’m mad at him.

Colbert: Yeah, i don’t like that either. That’s scary, jake.

Tapper: Well, I don’t like it when, you know, there’s misbehavior. So you watch yourself.