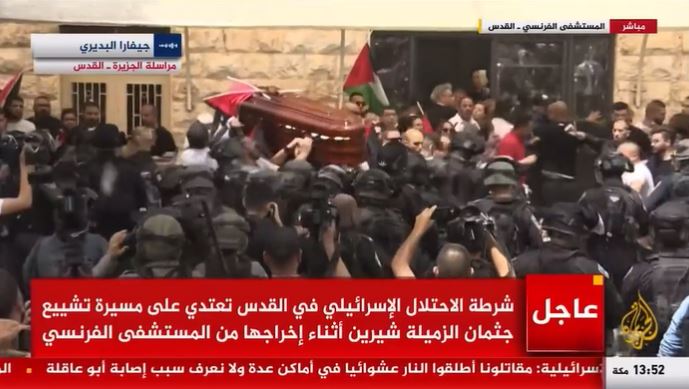 The incident transpired outside a hospital in East Jerusalem, where people had gathered to transport the coffin to a nearby church for her funeral. Abu Akleh was a Palestinian-American who was also a Christian.

The incident followed a standoff between police and a crowd grieving Abu Akleh’s death. During the standoff, at least one empty plastic bottle was thrown at the police.

After the bottle was thrown, police advanced on those carrying the coffin, swinging batons and kicking. The mourners fought back by throwing projectiles, including a stick and rocks. Police then threw smoke grenades back at the mourners. The Israeli government said the police were “forced to act” after some mourners in the crowd started throwing the projectiles.

A highly-respected correspondent in her field, Abu Akleh was killed earlier this week in the city of Jenin, part of the occupied West Bank. Her employer and multiple witnesses say she was fatally shot in the face by an Israeli soldier. The IDF, on the other hand, said Friday that while she may have been accidentally shot and killed by an Israeli soldier, she might also have been shot by a Palestinian gunman.

A spokeswoman for Israel’s Prime Minister Naftali Bennett declined to comment to the New York Times, as did a spokesman for the Israeli public security minister, Omer Bar Lev, the country’s de-facto police comissioner.

Abu Akleh was eventually buried in Mount Zion Protestant Cemetery, next to her parents.

As we noted on Wednesday, at least 27 journalists have been killed while on the job since the start of the year. Seven were killed in Ukraine, eight in Mexico, according to Reporters Without Borders.

Among the journalists who have been killed since Jan. 1, 2022 are Fox News cameraman Pierre Zakrzewski and Fox News freelance producer Oleksandra “Sasha” Kuvshynova.