FBN’s Trish Regan talks with GirlBoss, about being a working mother, and why she wishes she’d taken more time off, from CNBC and Bloomberg, after she had her children: “I was constantly in a state of conflict wishing I was home when I was at work—while convincing myself I was ultimately doing the right thing for my family, my network and my career. A lot of this pressure was self-inflicted. But, I was also highly influenced by my work environment and that’s the reason why I make such a point to tell my story to the prospective mothers with whom I now work.”

NBC’s Peter Alexander talks with Fatherly about how, with his busy schedule at the White House, he spends time with his daughters: “First on FaceTime from the booth at the White House, where we have breakfast together. I get there before they wake up for the Today Show. And then I see them each night for a couple of hours after they’ve had dinner and I come home, we have sort of a second family dinner. And then playtime, reading, and saying goodnight. Weekends, we make family time, just because so much of my week I’m somewhere else because of other responsibilities at work.”

FNC’s Tucker Carlson participated in Barstool Sports’s popular Pizza Review segment, hosted by the founder of the provocative sports and pop culture site Dave Portnoy. Carlson, who has had Portnoy on his program in the past, gave mixed reviews to the pizza from Nino’s 46 in midtown Manhattan. But Barstool readers, (known as “Stoolies”) who are primarily men 18-34, gave Carlson glowing reviews for his performance. 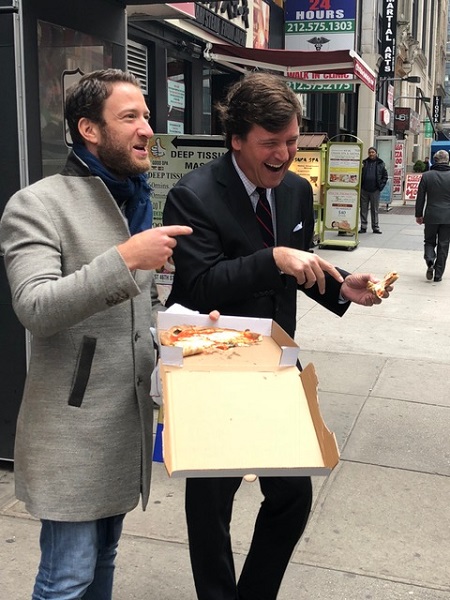