NEXT:Report: WarnerMedia Boss Jason Kilar Is 'Keen on Developing a Global Direct-to-Consumer Offering for CNN'
PREVIOUS:Sara Haines Is Finalizing a Deal to Return to The View 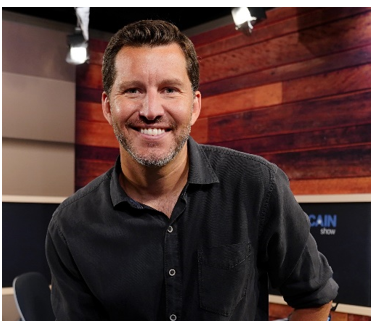 Harris Faulkner spoke with The New York Times Real Estate section earlier this month about her family’s townhouse across the Hudson River in Edgewater N.J.: “Partly because of its proximity to the water, partly because of the expansive deck, the anchor mat outside the front door, the light, airy rooms and the starring role played by the color blue, Ms. Faulkner’s home feels more beach house than townhouse.”

Sean Hannity was interviewed by the Atlanta Journal-Constitution for his new book, Live Free or Die, already No. 1 on Amazon. He was asked about the conspiracy theory-pushing, far-right organization QAnon, a group which Georgia House candidate Marjorie Taylor Greene supports and that’s focused on a supposed secret plot by an alleged “deep state” against President Trump and his supporters. “I see the articles. I have no earthly idea what it’s about at all. One person tried to explain to me. It’s what? Who’s that?”

Hannity worked at former news/talk station 640/WGST-AM from 1992 to 1996 before being hired by Fox News and still has a deep love for Atlanta.

“Next time I go to Atlanta, the first place I’m going is the Varsity,” said Hannity, who lives on Long Island in New York. “I really want a hot dog there!”

Heard locally on WSB radio, Hannity attracts more than 10 million daily listeners nationwide and is considered the most influential radio talk show host in the country by Talkers magazine, which tracks talk radio. This year, Hannity has attracted an average of 4.2 million viewers on Fox News, the most of any cable news host, easily beating MSNBC’s Rachel Maddow and CNN’s Chris Cuomo in his time slot. His TV ratings have only gone up in recent months since the pandemic began.

Former ESPN Radio personality Will Cain left the Worldwide Leader in Sports at the end of June to join Fox News as co-host of Fox & Friends Weekend. Cain, one of ESPN’s few openly conservative voices during his stint at the network, joins Jedediah Bila and Pete Hegseth as a permanent co-host of the morning show this coming Saturday, Aug. 15.

On how he’ll treat Trump while he’s co-host of the program, Cain told Cleveland.com: “I’m going to tell the truth on an issue-by-issue basis. I’ve criticized the president in the past, but I’ve had more compliments of the president now that I’ve ever had. I only have one allegiance, and it’s to the truth.”

Here he is on the weekday edition of Fox & Friends:

Entertainment Tonight did a feature on Maria Bartiromo last night: