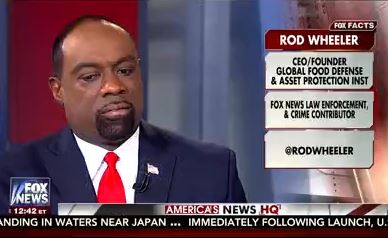 Buckle up. This is a wild one.

In an explosive new lawsuit, Fox News contributor Rod Wheeler claims statements he made in a Fox News story about murdered DNC staffer Seth Rich were falsely attributed to him.

But that’s not all he’s claiming.

Wheeler says the story, published May 16 on FoxNews.com and retracted a week later, got the approval of Pres. Trump.

And he has a text message to prove it.

That text message was sent to Wheeler by Ed Butowsky, a Trump supporter who was bankrolling an investigation into Rich’s murder. (Butowsky told NPR he was joking that Trump had read the story before it was published.)

Wheeler, a private investigator, is suing Butowsky, 21st Century Fox, and the reporter on the story Malia Zimmerman.

On July 10, 2016, Seth Rich, a 27-year-old DNC staffer, was fatally shot near his home in the Bloomingdale neighborhood of Washington, D.C. It didn’t take long for conspiracy theorists to come up with their own conclusions about the murder, that it had something to do with DNC emails sent to WikiLeaks. From the lawsuit:

“The accusation that FoxNews.com published Malia Zimmerman’s story to help detract from coverage of the Russia collusion issue is completely erroneous,” said Jay Wallace, president of news for Fox News, in a statement. “The retraction of this story is still being investigated internally and we have no evidence that Rod Wheeler was misquoted by Zimmerman. Additionally, Fox News vehemently denies the race discrimination claims in the lawsuit — the dispute between Zimmerman and Rod Wheeler has nothing to do with race.”

“Zimmerman, Butowsky and Fox had created fake news to advance President Trump’s agenda,” the suit claims. “Mr. Wheeler was subsequently forced to correct the false record and, as a result, lost all credibility in the eyes of the public. Mr. Wheeler has suffered irreparable damage to his reputation and his career will likely never recover.”

In May, Fox’s D.C. TV station also retracted a report which included an interview with Wheeler. He had been hired by Rich’s family to look into the murder. They, too, are looking into legal options against Wheeler.

The attorney representing Wheeler is Douglas Wigdor who is also representing several current and former Fox employees in their lawsuits against the company, including anchor Kelly Wright who sued claiming racial discrimination.