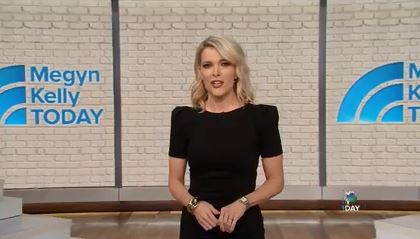 Megyn Kelly didn’t appear on Megyn Kelly Today this morning, as NBC aired a repeat instead. After the events of the past few days, her time at 9 a.m. appears to be coming to end—and perhaps her NBC News career as well.

When we sat down with Kelly over the summer, and chatted about the state of her morning show, she told us: “You’re definitely going to feel something when you watch this show, something other than anger.”

And while the show has had a number of high points, including interesting discussions about sexual harassment, female empowerment and #MeToo, it appears anger has become a signifcant part of the equation, especially in light of the controversial blackface remarks she made on Tuesday, which were covered on her network’s nightly newscast and even on her Today show lead-in.

During her daily round table discussion, Kelly questioned why the use of blackface on Halloween was inappropriate, surprising guests Melissa Rivers as well as fellow NBC Newsers Jacob Soboroff and Jenna Bush Hager, as well as igniting significant backlash on social media, particularly from folks on the left who weren’t huge fans of Kelly prior to the remarks.

She apologized for the remarks on Wednesday, and received a two-minute standing ovation from her in-studio audience.

Megyn Kelly Today–which launched 13 months ago—is on tape for the remainder of this week “given the circumstances,” according to an NBC News statement, and multiple news outlets are reporting that Kelly’s 9 a.m. show is on the ropes.

But it appears this move was in the works even before the notorious remarks, which ticked off her colleagues, most notably Al Roker, who called for “a bigger apology to folks of color around the country” given the long history of blackface used to “demean and denigrate a race.”

Kelly spoke with NBC News chairman Andy Lack earlier this month about stepping away from Today by the year’s end, The New York Times reported.

It’s not clear if Kelly will depart NBC entirely, though. She’s reportedly making over $20 million per year right now, so NBC would probably prefer to keep her in a different capacity, and not cut their losses and just show her the door.

According to a Hollywood Reporter story which published late last night, Kelly had been in talks with another talent agency, UTA, about leaving CAA for them.

CAA is considered the elite Hollywood talent agency, while UTA has one of the strongest East Coast-based talent rosters.

UTA chief Jay Sures had reportedly been speaking with NBC News president Noah Oppenheim on Kelly’s behalf about changing her focus there. For instance, Kelly had always shown a desire to be included in the network’s hard-news coverage. To be fair to NBC, the network has featured her in its main coverage team for special political events, including Pres. Trump’s State of the Union, and the Brett Kavanaugh hearings. She was also slated to lead NBC News’ coverage of the midterm elections, alongside Lester Holt, Savannah Guthrie, and Chuck Todd.

Then the blackface controversy happened, and she and CAA parted ways for UTA—but UTA dropped Kelly in light of the controversy, according to THR. So now she doesn’t have an agent, but did just hire a new hot shot litigator.

So the question now becomes: What is left for Megyn Kelly at NBC News? It appears the morning show isn’t going to work. In fact, the Oct. 25 edition of Megyn Kelly Today may have been the final one. The Sunday evening newsmagazine lasted only one season (she did host a couple Dateline NBC specials on Sunday nights over the summer). She’s probably not going to host a show on MSNBC. The cable news channel tried that with Greta Van Susteren, someone a bit more moderate than Kelly (who considers herself “an independent with some center-right views”) but her show didn’t resonate with the progressive audience and ended after 5+ months in 2017.

A $20 million+ annual salary is a lot for a contributor/ correspondent/legal analyst gig.

Will she go back to Fox News? How about another broadcast network?

That all remains to be seen…