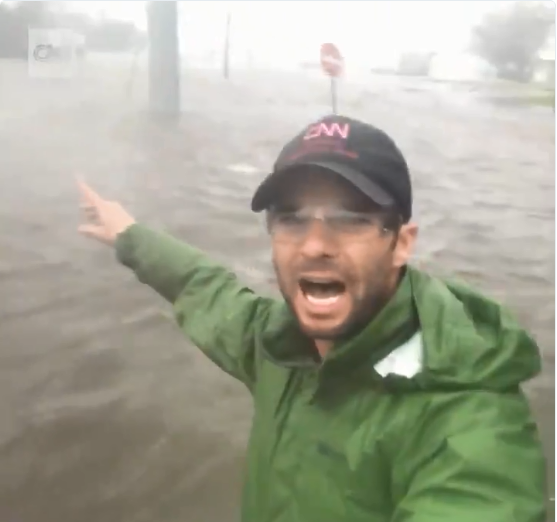 The hurricane is set to crash into Panama City Beach head on during the 3 p.m. ET / 2 p.m. CT hour, and according to to the National Hurricane Center, there’s “life-threatening storm surge…hurricane force winds…and heavy rainfall occurring over the Florida panhandle” right now.

ABC News chief meteorologist Ginger Zee and her crew appear to be OK.

Our ability to broadcast is gone but we are safe. Wanted to let you all know.

Just watched a house pushed off its foundation down the street with storm surge. STORM SURGE POWER #Michael pic.twitter.com/0oZYwzajH3

.@RickLeventhal is live in Panama City Beach as #HurricaneMichael makes landfall in Florida. @ShepNewsTeam has the latest from the Fox News Deck. Tune in to Fox News Channel for continuing coverage of Hurricane Michael. https://t.co/vbFCXzoUWO pic.twitter.com/gcqYmAZyPl

Thousands of Floridians are without power:

Currently, more than 174,000 customers without power in FL thanks to #Michael and that number will climb as we start to see the outages get going in GA and eventually the Carolinas! pic.twitter.com/B5VTbWwk2u

The Weather Channel’s Jen Carfagno is in Tallahassee.

Power outages growing across #Tallahassee area. 115,000+. Some traffic lights out. I’ve been hearing the boom of fuses blowing. #HurricaneMichael pic.twitter.com/uCK8kaFWb4

NBC Nightly News anchor Lester Holt and his crew are lifting a hotel room mattress to cover their window:

WATCH: Facing powerful Hurricane Michael winds, @LesterHoltNBC and his news crew move a Panama City hotel mattress to cover their window: “We want to be on the air, but we’ve got to take care of each other.” pic.twitter.com/06O4pFYzXc

.@jeffglor in Panama City Beach, Fla.: “The wind here is horrendous — far worse than a lot of folks expected. Keep in mind, this went from a tropical storm to what I believe is almost a Category 5 storm in about 72 hours or so.” https://t.co/dMc73VUub8 pic.twitter.com/E9uzkiHWpq