NEXT:Scoreboard: Thursday, Aug. 29
PREVIOUS:Hoda Kotb Returns to Today: 'It Did Feel Like Christmas Morning a Little' 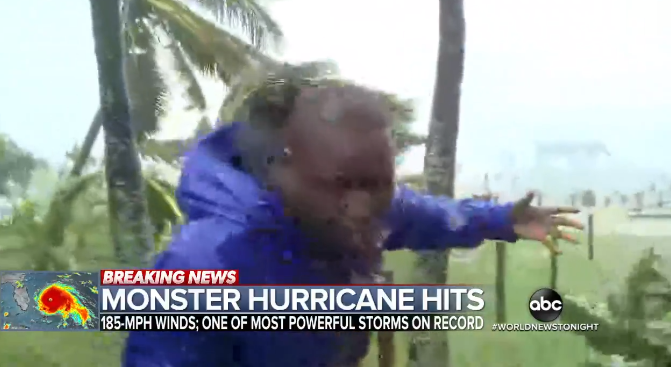 Hurricane Dorian is picking up strength as it makes its way, slowly but surely, towards the east coast of the United States.

Dorian made landfall in the Bahamas yesterday afternoon, and the islands felt the wrath of this extraordinary storm consisting of 185 mph winds.

Meteorologists are saying that the storm is moving so slowly (barely over one mph) that it will continue to pound the Bahamas today and into Tuesday, dropping as much as 30 inches of rain in some locations.

ABC News’ Marcus Moore is one of the few national TV newsers on the scene , and during his report for World News Tonight Weekend last night referred to the situation in the Northwest Bahamas as “pure hell.”

‘CATASTROPHIC’ HURRICANE: @marcusmoore reports from the Abaco Islands, after Hurricane Dorian made landfall in northwest Bahamas as a massive Category 5 storm, calling the situation “pure hell,” adding, “this will no doubt be a deadly event.” https://t.co/jhZvRCuSOO pic.twitter.com/exi9neG4Vz

“I have seen utter devastation here in Marsh Harbour with no way out,” he said. “The storm surge has taken over the terrain. Absolute devastation…there really are no words; it’s pure hell here.”

Moore added: “We heard that these would be category 5 winds, and the meteorologists, officials and experts were right.”

Bahamas’ prime minister Hubert Minnis gave a televised address yesterday, though communications are quite difficult on the island right now.

“This is probably the saddest and worst day of my life,” said pm Minnis. “We’re facing a hurricane that we’ve never seen in the history of the Bahamas.”

Latest images on Dorian from my family in the Bahamas. @breakingweather @cnnbrk @CNNweather @weatherchannel pic.twitter.com/2f0KkNdkHB

#HurricaneDorian beating up my Freeport,Bahamas 🇧🇸😢😪 The wind and rain is nothing we have ever seen before! Cars, homes total loss #Dorian2019 #flooded #PrayForTheBahamas pic.twitter.com/nwMIJHcRvX

Disastrous flooding from the Bahamas – lady who posted this video said: “#HurricaneDorian this was taken in a home by the canal 😭 my aunty live by the canal yall I scared” pic.twitter.com/EEZHE3GeCx

As of early this morning, Dorian seems to have come to what almost appears to be a standstill:

Devastating Cat 5 #HurricaneDorian has stalled out over #GrandBahamaIsland bringing the worst of the surge, rain and wind for many more hours. The East Coast of Florida, Georgia, the Carolinas need to monitor the latest forecasts closely and listen to their local officials. pic.twitter.com/FKd02uZEty

“That’s my kitchen window that water is hitting, and that has to be a minimum of about 20 feet above the ground.” Bahamas Minister for Agriculture Michael Pintard describes flooding from Hurricane Dorian at his house in Grand Bahama. https://t.co/gwEfK4bh8a pic.twitter.com/XxAR2r2RpA

As for the U.S., mandatory evacuations in Florida, Georgia and entire South Carolina coast start today at noon.

Dorian is already impacting life in Florida. The Rolling Stones moved their Miami show up to Friday night to to the oncoming hurricane, with Mick Jagger telling the audience that the band had been “stuck in front of The Weather Channel.”

Additionally, on Monday evening, CBS Evening News anchor Norah O’Donnell had the latest on Dorian and the devastation it left behind in the Bahamas. O’Donnell, who’s the only evening news anchor on the scene in Florida (Cocoa Beach), interviewed Jason and Sarah Gash who are riding out the storm at their home in Cocoa Beach. She ended Monday’s broadcast with a report on how South Florida is coming to the aid of the Bahamas.

O’Donnell also reported for CBS This Morning today from Florida, and she will be back live from Florida tonight for the CBS Evening News. 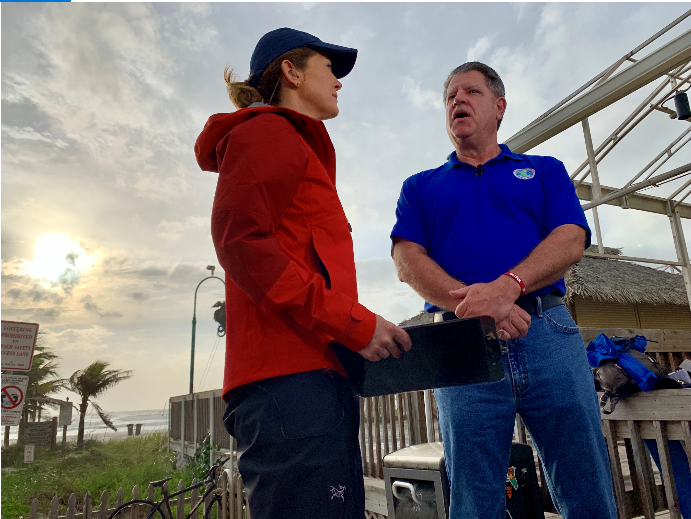