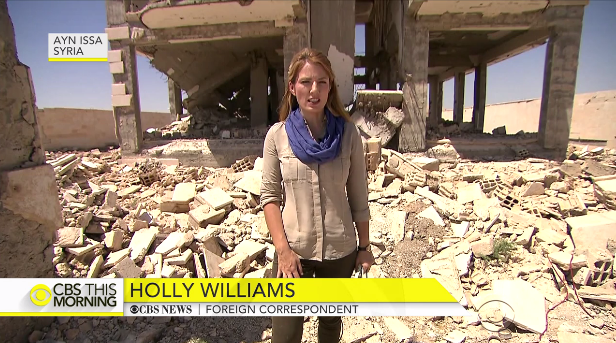 CBS News correspondent Holly Williams is part of the first U.S. broadcast network TV crew to venture inside the city limits of Raqqa City, Syria since the ravaged city came under ISIS control. Today, she filed a report for CBS This Morning detailing the extraordinary experience she and her crew endured inside the city this weekend.

“We’re fine right now,” Williams told TVNewser not long after her segment aired. “Some of the crew had sort of a hairy experience on Saturday that we weren’t anticipating, but we’re fine now.”

Williams and her team were traveling with the allied Syrian Democratic Forces this weekend when they were spotted by ISIS snipers. A cameraman and producer ran for cover. They made it to safety, but were pinned down by snipers. Then came word that an ISIS suicide car bomber was just 400 yards away, but that luckily turned out to be a false alarm. They eventually made their way into an armored car and got out.

The Australian-born Williams has been covering the rise of ISIS for more than 3 years, and described her walk into the city as “bizarre experience.”

“ISIS is still in control of most of the city so we still can’t go everywhere, but we did make it into the parts where the Syrian Democratic Forces have been chipping away at ISIS control,” said Williams. “It’s spooky, and it looks the same as many other places we have been to that are newly liberated, deserted by civilians. There are lots of empty houses, flattened buildings that have been taken down by U.S. airstrikes. There’s an eerie quality to it because there are soldiers and you see gunfire, and while it still looks like a city, normal life has totally disappeared.”

Williams is reporting from a region that is unbelievably dangerous for journalists. It’s not far from where James Foley was beheaded in 2012. Others have been crucified, or thrown from buildings by extremists.

Then there’s the case of Austin Tice, the Marine-turned journalist who went missing in 2012 while reporting from Syria. The New York Times reported just last week that CIA director Mike Pompeo spoke with a Syrian regime official in February about Tice, with the hope that he could be freed by the Syrian government. Those discussions apparently fizzled after Syrian government’s nerve gas attack in rebel-held northern Syria in April influenced the American missile strike in response.

A veteran foreign correspondent, first for the BBC and Sky News before landing at CBS News in 2012, the Istanbul-based Williams knows she is taking a significant risk every single day she is out in the field. She has a husband and a young daughter.

“I have been living in Istanbul for five years, and covering ISIS has been such a big part of what I do,” said Williams. “I feel strongly that we need to report it because I want to show people in America the impact that ISIS is having on people here in the Middle East. And most of them are Muslims who are suffering at the hands of ISIS, but I think sometimes not everyone hears that message. ISIS wants to tell the world that this is a clash of civilizations. They want to say that it’s Islam against the West, whether it’s the Christian West, or the Judeo-Christian West, or the Secular West. That’s their narrative. The danger is that if we in the West somehow buy into that, and I think that the way that we understand that this is not the case is to understand that so many of the extremist victims are Muslim. So, a big reason why I want to keep on coming back to Iraq and Syria is to tell stories of local people here who have suffered at the hands of ISIS.”