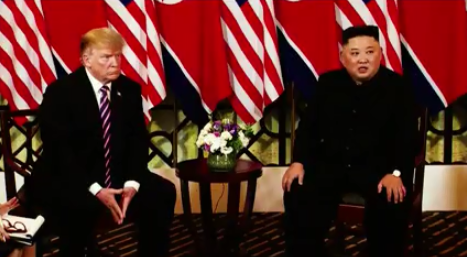 The two countries did not reach a deal. In fact, the lunch and traditional signing ceremony were actually canceled due to disagreements, which included the U.S. refusing to lift sanctions. However, the two sides will continue to negotiate, asserted U.S. Secretary of State Mike Pompeo.

“Well, ladies and gentlemen,” Trump said at the end, “I’m about to get on a plane and fly back to a wonderful place called Washington, D.C.”

After several questions on the nuclear talks from reporters – along with a surprise shoutout to Fox News host Sean Hannity – ABC News’s Jon Karl asked about Trump about the Cohen saga, or as Karl phrased it the “drama back in Washington.” Cohen called president a lot of things in front of a lot of people yesterday, among them “a racist,” “a conman,” and “a cheat.”

“I tried to watch as much as I could. I wasn’t able to watch too much because I’ve been a little bit busy,” said Trump, who referred to the hearing as “fake.” Trump said his former lawyer “lied a lot” before remarking that there’s “no collusion,” “Russian hoax,” and “witch hunt.”

That was the only Cohen question. While Trump did call on the New York Times, Washington Post, and Bloomberg, Jim Acosta said the president mostly “steered clear” of the White House press corps, where he may have faced more questions on Cohen’s claims. Acosta said that Trump seemed to be “selecting journalists at random,” calling on a number of foreign journalists, including from Chinese and Russian media.

The photo op came the morning after, “the White House abruptly banned four U.S. journalists from Trump’s dinner with Kim “after some of them shouted questions at the leaders during their earlier meetings.” That’s according to the Washington Post’s Philip Rucker and Josh Dawsey.

Needless to say, this move really pissed off Reuters, the AP, and a number of press advocacy organizations, all of which released statements condemning the White House’s move.

The AP said it “decries such efforts by the White House to restrict access to the president. It is critically important that any president uphold American press freedom standards, not only at home but especially while abroad.”

“Reuters is deeply troubled by the exclusion” the wire service said in a statement “and believes it is essential that government provide access to – and the ability to ask questions of – officials and hold them to account.”

Said WHCA president Olivier Knox: “The summit provides an opportunity for the American presidency to display its strength by facing vigorous questioning from a free and independent news media,” he added, “not telegraph weakness by retreating behind arbitrary last-minute restrictions on coverage.”

The White House would go on to restore press access for the aforementioned outlets, as well as Bloomberg and L.A. Times.